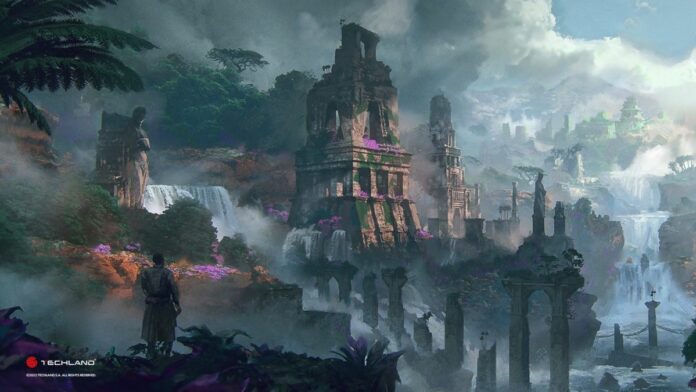 Dying Light 2 developer Techland has given the public its first glimpse of its brand new IP, which is going to be an open-world fantasy RPG.

The image comes from the developer who has announced in a tweet that the project is an “unannounced AAA Open World Action-RPG in a fantasy setting.”

Gamespot notes that Stachyra is credited for writing the beloved Bloody Baron mission in The Witcher 3: Wild Hunt.

The concept art is very pretty, and while it’s hard to parse, there are hints to be found in the image, especially when it comes to the setting. The photo features a figure with its back to our perspective, looking at multiple waterfalls flowing around ancient ruins.

The architecture is an interesting mix of the Tikal ruins in Guatemala, but with some Greek or Roman-inspired statues. It’s hard to place the inspiration exactly, but it all seems to be based in a lush, tropical setting.

It’s hard to make out the style of clothing of the figure either, but it looks like they’re either wearing padded armor or practical leather. Outside of that, there’s no immediate threat in the image, and it looks like the main function is to encourage a player to explore the ruins.

It appears the impotence of this reveal is to try and attract talent to the project. In the announcement tweet, Techland put text on the image saying, “Let’s build an exciting brand-new world together!”.

We recently saw this tactic of showing a glimpse of new AAA IP as part of a recruiting drive for an upcoming Blizzard survival game.

This seems to be a growing tactic for studios who are looking to fill out big teams, quickly. With E3 canceled, it’s possible we might see even more games announced as part of recruitment efforts. If you’re interested in seeing if you could work on the game, Techland has multiple positions open.