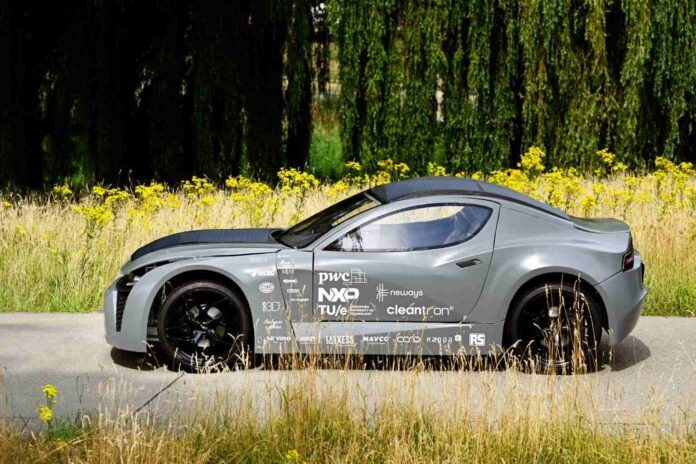 TU Eindhoven student team TU/ecomotive has developed a sustainable electric passenger car that captures more carbon dioxide (CO₂) than it emits while driving. A prototype called Zem purifies the air through a special filter. By storing the captured CO₂ and then disposing of it, Zem can contribute to reducing global warming. The students will continue to improve the vehicle in the coming years, with the goal of making it carbon-neutral for its entire life cycle and eventually hitting the road.

The transport sector is a major polluter, producing about a quarter of the EU’s total carbon emissions a few years ago. Passenger cars are responsible for more than 60 percent of these emissions. To reduce these emissions, 35 students designed, developed, and built a car that produces fewer or no emissions both during production and on the road. In addition, the team strives for optimal reusability of materials in the future.

The car can capture 2 kilograms of CO₂ through a special filter at 20,000 travel miles per year. This means that ten cars can store as much carbon dioxide as an average tree. The team argues that that may not seem like much, but the overall payoff is significant if you were to soon implement it on a large scale in every passenger car. After all, there are more than a billion passenger cars driving around the world, which could capture net CO₂ instead of emitting it.

The filter through which the outside air flows is unique: the students are in the process of applying for a patent for this innovation. “It is really still a proof-of-concept, but we can already see that we will be able to increase the capacity of the filter in the coming years. Capturing CO₂ is a prerequisite for compensating for emissions during production and recycling,” explains team manager Louise de Laat. TU/ecomotive is thinking of a future where the full filter can be emptied easily via the charging station when the car is charging. The car can currently drive 320 kilometers before the filter is full.

A life cycle analysis with SimaPro software can be used to determine the extent to which the vehicle’s life cycle – from construction to use and afterlife – is CO₂-neutral. Several innovations contribute to this goal. Consider the 3D printing techniques used by the students. The monocoque and body panels are manufactured via 3D printing, resulting in almost no residual waste. In addition, the student team prints circular plastics that can be shredded and reused for other projects.

The electric and sustainable four-wheeler has a sporty look. For a good reason, say the students, a sporting challenge awaits the automotive industry. After all, road transport must become much more sustainable. Nikki Okkels, external relations manager at TU/ecomotive: “We want to tickle the industry by showing what is already possible. And working together. If 35 students can design, develop and build an almost carbon-neutral car in a year, then there are also opportunities and possibilities for the industry.”

Okkels: “We call on the industry to pick up the challenge, and of course, we are happy to think along with them. We’re not finished developing yet either, and we want to take some big steps in the coming years. We warmly invite car manufacturers to come and take a look.”