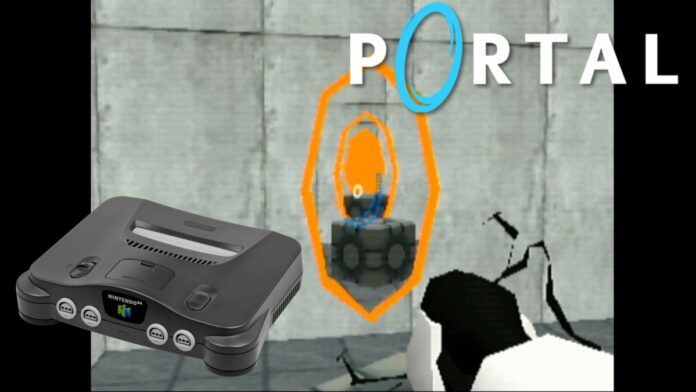 A small team has been hard at work with a demake of Portal, but the real kicker is that it’s running on Nintendo 64 hardware. Meanwhile, Portal — which I remind you is from 2007 — still doesn’t have a release date more specific than ‘2022’ for the Nintendo Switch.

Dedicated Nintendo devotee James Lambert released a video showing off the power of Nintendo’s 25 year old cartridge-based console, as he tests the addition of the portal gun to the project. Showing off the basics of the portal gun, he’s initially skeptical of the engine’s capability to render recursive portals. But as he experiments, James quickly ups his predictions from four portals deep to six while still running smoothly. Having iterated on his success as any proper mad scientist would, James finally rests his case: 14 portals deep is as high as he’s going to try.

James then goes on to explain that he uses a rendering process that ‘culls’ any objects that are offscreen for the player to save on resources by making them invisible. Leaving aside the nightmarish philosophical implications of everything disappearing when you look away, this trick is a clever way to stretch the limits of the N64’s hardware, which features a venerable 93MHz processor and whopping 4MB of RAM. And, in case you had forgotten, we do already know that the N64 will run Doom.

The world of demakes has been an absolute goldmine lately, with an excellent concept of Horizon Zero Dawn rendered for the PS1 most recently. Further back, there was even a fan remake of Bloodborne imagined as a PS1 game actually available to play this spring. The bridge between nostalgia and creativity is powerful, and it makes me want to see even more playable ideas come to fruition.

Powered by the strength of wickedly smart writing, Disco Elysium would be right at home in an era of clever and funny MS-DOS games like Quest for Glory. Despite its gorgeous art style, it would slip into the guise of an early 90’s EGA/VGA graphics adventure game effortlessly. And I can’t be alone in thinking that recent asymmetrical co-op games like Dead by Daylight or Evil Dead: the Game would be hilarious as split-screen games from the CRT-era of televisions. I also imagine they’d be likely to start fistfights. But who hasn’t had a tussle over screen-cheating in Goldeneye in their youth?