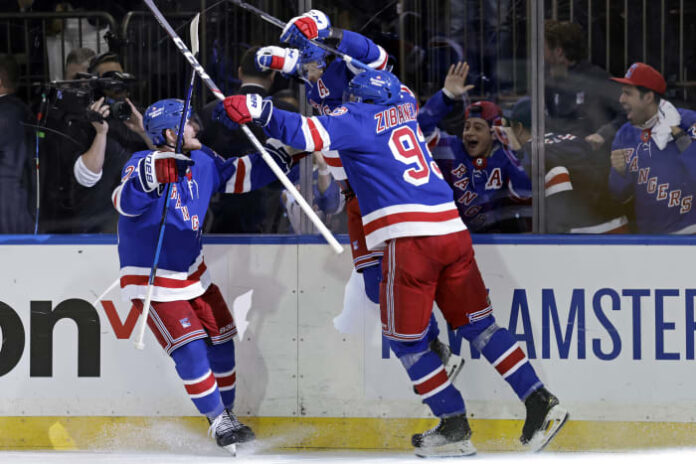 NEW YORK – Artemi Panarin scored a power-play goal 4:46 into overtime and the New York Rangers beat the Pittsburgh Penguins 4-3 Sunday night to advance to the second round of the Stanley Cup playoffs.

Mika Zibanejad had a goal and two assists, and Chris Kreider and K’Andre Miller also scored for New York, which got its third straight comeback win after trailing 3-1 in the series. Andrew Copp had two assists and Igor Shesterkin stopped 42 shots.

The Rangers went on a power play 2:55 into overtime when Pittsburgh’s Brock McGinn was called for holding. Late in the advantage, Panarin got the puck on the right side and fired a shot from the right circle past Tristan Jarry.

The Rangers players all mobbed Panarin along the boards in the left corner as the sold-out Madison Square Garden crowd erupted into a frenzy. New York advanced to the second round for the first time since 2017, when they lost to Ottawa.

New York will play Carolina next. The Hurricanes beat the Boston Bruins in Game 7 on Saturday night.

Evan Rodrigues had a goal and an assist, and Jake Guentzel and Danton Heinen also scored for the Penguins, who were ousted in the first playoff series for the fourth straight year. Jarry returned in goal and had 26 saves in his first game since April 14.

The Penguins also had captain Sidney Crosby back after he missed the last game with an upper body injury sustained midway through Game 5.

Tyler Motte had a short-handed breakaway 8 1/2 minutes into the third period, but Jarry made a nice kick save on his forehand attempt to preserve Pittsburgh’s 3-2 lead.

Zibanejad scored on a shot from the inside edge of the left circle off a pass from Copp with 5:45 left to tie it with his third of the series — all in the last two games.