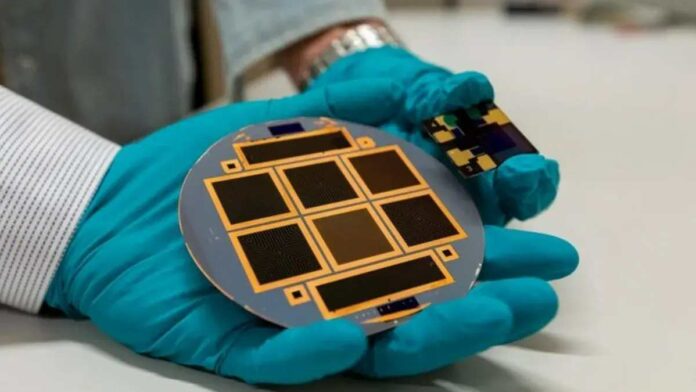 A collaboration of researchers from various institutes in the Netherlands broke the 30 percent barrier associated with solar cells. The achievement will help uptakeworldwide solar energy and reduce our dependence on fossil fuels, an organizational press release said.

If this could be improved, it would mean that more power can be generated in the same patch of land at a lower cost per unit, increasing energy availability while reducing the end cost to customers, making it a win-win proposition.

To do so, researchers in the Netherlands came together to create a four-terminal perovskite/silicon tandem device. A tandem device can better use solar spectrum since it uses a mix of silicon-based solar cells with perovskite-based solar cells. While the former works well with light in the visible and infrared spectrum, perovskites can use wavelength in the ultraviolet and visible light while being transparent to infrared light.

In a four-terminal tandem device, the top and bottom cells can operate independently, allowing bifacial tandems to be used, further boosting the power output of the architecture.

The press release said that the researchers improved the efficiency of a semi-transparent perovskite cell with an area of 3×3 sq. mm up to 19.7 percent. Below this, a silicon solar cell, which was 20X 20 sq. mm wide, was placed. The tandem device also had a highly transparent back contact that allowed 93 percent of the near-infrared light to reach the bottom of the device.

The silicon device was optimized using a host of features, and its efficiency improved to 10.4 percent. Together with the perovskite solar cell, the device delivered a combined energy conversion efficiency of 30.1 percent, making it the best efficiency achieved so far.

European researchers have also found that combining the perovskite cell with other existing technologies can increase energy efficiency beyond 30 percent. Now that the components needed to reach this mark are known, the researchers are working on how the material and processes can be scaled up and bring them into mass production.

The device developed by the researchers was certified by the ETSI, Italy, and the results were presented at the 8th World Conference on Photovoltaic Energy Conversion (WCPEC-8) in Milan. The findings have also been published in the peer-reviewed journal, Progress in Photovoltaics.

Excellent surface passivation induced by (i)a-Si:H is critical to achieve high-efficiency silicon heterojunction (SHJ) solar cells. This is key for conventional single-junction cell applications but also for bottom cell application in tandem devices. In this study, we investigated the effects of (i)a-Si:H deposition temperature on passivation quality and SHJ solar cell performance. At the lower end of temperatures ranging from 140°C to 200°C, it was observed with Fourier-transform infrared spectroscopy (FTIR) that (i)a-Si:H films are less dense, thus hindering their surface passivation capabilities. However, with additional hydrogen plasma treatments (HPTs), those (i)a-Si:H layers deposited at lower temperatures exhibited significant improvements and better passivation qualities than their counterparts deposited at higher temperatures. On the other hand, even though we observed the highest VOCs for cells with (i)a-Si:H deposited at the lowest temperature (140°C), the related FFs are poorer as compared to their higher temperature counterparts. The optimum trade-off between VOC and FF for the SHJ cells was found with temperatures ranging from 160°C to 180°C, which delivered independently certified efficiencies of 23.71%. With a further improved p-layer that enables a FF of 83.3%, an efficiency of 24.18% was achieved. Thus, our study reveals two critical requirements for optimizing the (i)a-Si:H layers in high-efficiency SHJ solar cells: (i) excellent surface passivation quality to reduce losses induced by interface recombination and simultaneously (ii) less-defective (i)a-Si:H bulk to not disrupt the charge carrier collections.