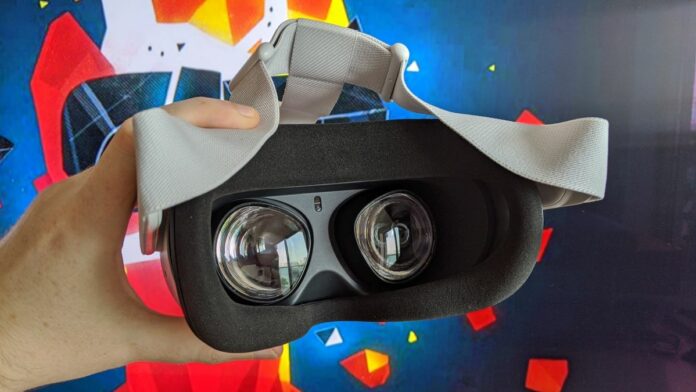 While giving a talk at Display Week 2022 Meta display engineer, Cheon Hong Kim, revealed several details about the Meta Quest 2 (formerly Oculus Quest 2), including that its resolution isn’t quite what we’ve thought it was.

The Quest 2 uses a 1920 x 1832 resolution display for each eye, but because of its lenses, that’s not the resolution we actually see (via UploadVR). For starters, the lenses are circular whereas the screen is rectangular, so the corners are cut off – and Meta has literally cut the corners off the displays to remove unnecessary bulk.

On top of this, as you toggle the lenses between their three IPD settings – which changes how far apart they are – the section of the screen that can be seen through them also changes.

However, as Meta goes on to explain, the fact that we aren’t seeing the screen’s full resolution isn’t really a problem. It’s not the resolution of the display that matters but its pixel density.

Through the screen door

One problem with VR headsets is something called the screen door effect. Because displays use an array of pixels in a repeating pattern it’s possible to notice lines in the image – an effect that makes it feel like you’re looking through a screen door – especially when you’re right up close to them.

As such, Meta aims to use high-pixel-per-inch displays and foveation technologies to steadily push pixel-per-degree counts beyond 60PPD (the limit that humans can perceive).

Based on current rumors, Project Cambria is expected to use new 2.48-inch mini LED displays with 2160 x 2160 pixels per eye. This should bring the new headset’s pixel-per-inch up to 1230PPI – compared to the Quest 2’s 773PPI.

To work out Cambria’s pixel-per-degree we’d need to know its focal length which we don’t but assuming it’s the same as the Quest 2’s we’d be looking at a PPD of 33. That would still be a fair distance from the target of 60PPD, but significantly closer than the Quest 2’s 21PPD.

That being said, there’s a strong chance that Project Cambria will have a more compact design based on what Meta has said, and so its focal length will likely be different. So, as with all speculation, we’ll have to wait and see what Meta officially announces.

However, improving the quality of its displays is clearly a top priority for Meta so expect to see plenty of improvements when Cambria and its future headsets (like the Meta Quest 3) launch.