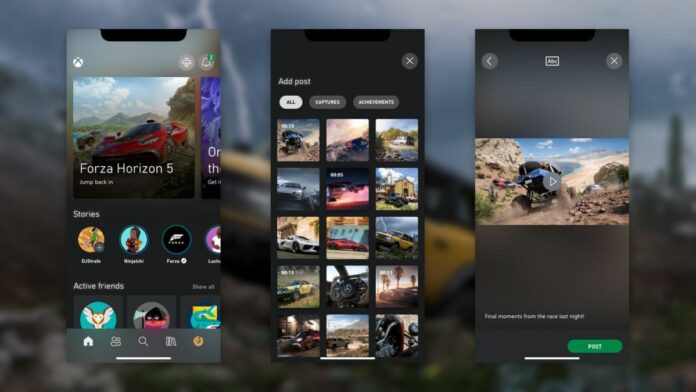 Better late than never, Microsoft is adding a Snapchat-like Stories feature to the Xbox app for iOS and Android.

Judging from Microsoft’s description of it, “Xbox Stories” work similarly to those on other platforms, but the content does have the distinction of lasting up to 72 hours instead of a day. This is all a part of Xbox’s big May update where it also introduced its new Quality of Service (QoS) Tagging feature.

In these Stories, you’ll be able to share heated gamer moments by posting in-game clips, screens, and achievements with your friends or the community at large. Stories can be replied to with either message or a quick emoji reaction, just as you would on other platforms.

Upon updating the app, you’ll see a new Stories channel right on the home screen. You can start posting stories by opening the channel and tapping the new plus symbol next to your Gamertag. Then you can select whatever you want to share, add a caption during the preview page, and hit the post button. This new feature is currently available in Australia with an eventual rollout to other regions coming soon.

Admittedly, it is strange to see Microsoft doing this. Especially when the latest trend is to rip off TikTok by having a continuous vertical video feed. A lot of other social media platforms implemented their own version of Snapchat Stories, only to discontinue the feature not long after.

Now, we just have to wait for Microsoft to make this Xbox feature global before everyone totally moves on from the Stories concept.

In the same May announcement is the QoS Tagging feature. It’s a new function that lets players set a priority tag to certain console system features that can get bogged down with latency and congestion. That way during times of high user traffic, your connection stays stable as it gets priority over others.

Things like party chat, console streaming, and multiplayer modes are given as examples of areas that will have this tagging. That said, not everyone can take full advantage of it.

According to Microsoft’s support page for QoS Tagging, your router/gateway and ISP network must support the Low Latency DOCSIS standard for it to work. Microsoft also warns there may be some connection problems anyway if you utilize the tagging.

Now, we just have to wait for Microsoft to make this Xbox feature global before everyone totally moves on from the Stories concept.