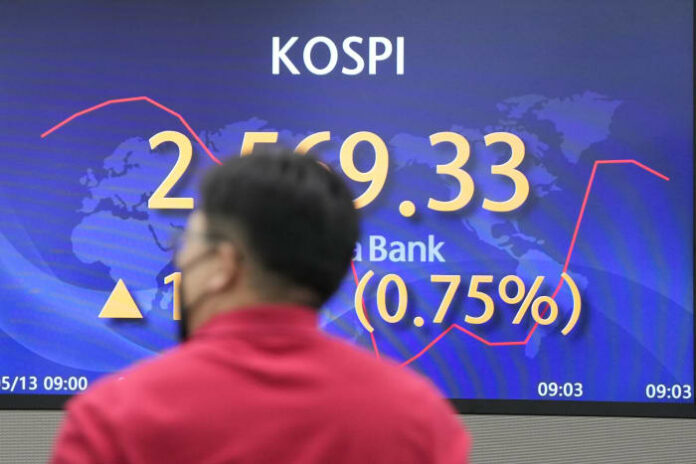 World shares bounced back Friday from losses earlier in the week, shrugging off data showing U.S. wholesale prices soared 11% in April from a year earlier.

Gains in Europe and Asia followed a mixed and muted close Thursday on Wall Street. Oil prices and U.S. futures also were higher.

Investors are puzzling over what’s next with inflation and the U.S. central bank’s response to it. Trading has been volatile, with indexes prone to sharp swings as investors try to shield their portfolios from the impact of the highest inflation in decades.

“Nothing has materially changed in the world from yesterday, and if anything, Russia/Europe risks are increasing. The rally today looks more like a technical rebound after a torrid week, than a structural turn in sentiment. As such, it should be taken with a grain of salt,” Jeffrey Halley of Oanda said in a report.

Federal Reserve Chair Jerome Powell, fresh off winning Senate confirmation for a second four-year term, for the first time Thursday acknowledged that high inflation and weakness in other economies could thwart his efforts to avoid a recession.

Powell had earlier sought to portray the Fed’s efforts to tighten interest rates as consistent with a so-called “soft landing” for the economy.

Central bank moves to fight back against price increases by raising interest rates are pulling some currencies lower while the dollar rises. The Japanese yen has weakened sharply in the past several months, while the Chinese yuan, whose value against other currencies is regulated, has also weakened.

The euro, likewise, has weakened amid the fighting in Ukraine and uncertainty over supplies of Russian gas and oil . The euro was trading at $1.0410 early Friday, having fallen below the $1.0500 level it had hovered above for most of the week.

“European risk sentiment is getting mangled by news of Russia cutting gas supply in retaliation for sanctions,” Stephen Innes of SPI Asset Management said in a commentary.

“EUR (the euro) has crashed through $1.05 and has even broken down through $1.04 on the back of the news. Indeed, this truly highlights the uncertainty as we advance with the threat and disruption of the Russian energy supply,” he said.

The indexes are on pace for sharp weekly declines, extending the market’s slump so far this year. The benchmark S&P 500 is now down 17.5% this year, while the Nasdaq is down 27.3%.

Smaller company stocks held up far better than the rest of the market. The Russell 2000 rose 1.2%.

The Labor Department’s report that wholesale prices soared 11% in April from a year earlier adds to concerns that manufacturing costs are being passed on to consumers, who might pull back on spending, crimping economic growth.

On Wednesday, the Labor Department’s report on consumer prices showed a bigger increase than expected in prices outside food and gasoline. That “core inflation” can be more predictive of future trends.

Inflation has been worsened by Russia’s invasion of Ukraine and the conflict’s impact on rising energy prices. China’s recent lockdowns amid concerns about a COVID-19 resurgence have also worsened supply chain and production problems at the center of rising inflation.

In other trading, U.S. benchmark crude oil gained 97 cents to $107.10 per barrel in electronic trading on the New York Mercantile Exchange. It gained 42 cents to $106.13 per barrel on Thursday.

Brent crude, the pricing basis for international trading of crude, added $1.18 to $108.63 per barrel.