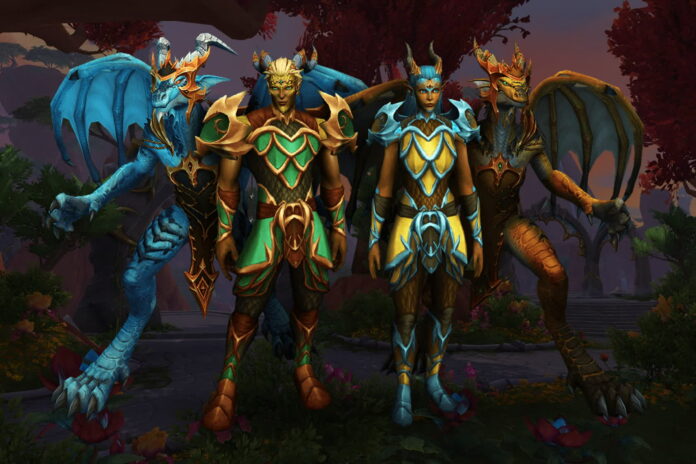 Highly anticipated: World of Warcraft’s last expansion, “Shadowlands,” wasn’t quite the savior many of the MMO’s hardcore fans were hoping it would be — it brought some much-needed changes in some areas but remained stagnant in others. Blizzard hopes to change that with its latest “Dragonflight” DLC. It’s adding in an entirely new race and class (technically, a race-class combo) and even bringing back talent trees after their removal many years ago.

There’s a lot more ground to cover, but we’ll start with this expansion’s cinematic trailer, which you can watch above. It gives us our first look at the Dragon Isles, a mystical region filled with beauty, wonder, and a distinctly different tone than what we’re used to from this MMO.

Occasionally, World of Warcraft gets a more “relaxed” expansion that doesn’t lean so heavily into giant faction conflicts and bitter, world-ending rivalries and grudges. Once upon a time, that expansion was Mists of Pandaria, and from what we can tell, it looks like Dragonflight might follow suit. The environments are lush, vibrant, and seemingly free of the red or green corruption that plagued the last few expansions. Dragonflight’s cinematic trailer also downplays conflict and emphasizes hope and beauty, just as Mists’ did.

Of course, none of us will be able to say until we actually play the expansion, but that’s the vibe I’ve gotten from the screenshots, trailers, and assorted gameplay GIFs that have been shown so far.

So, what else makes Dragonflight unique? As with every expansion, Blizzard is highlighting a few key features, the first of which is World of Warcraft’s first-ever playable “race-and-class combo”: the Dracthyr Evoker.

The Dracthyr are a race of humanoid dragons with the ability to swap between a more “normal” human form and their “true” draconic form. If this works at all like the playable Worgen (WoW’s werewolves) race, the former is likely going to be used only for cosmetic purposes. If you try to do any actual combat, you’ll probably be forced into your true form.

The Dracthyr are WoW’s second “neutral” race after the Pandaren, which released with Mists of Pandaria in 2012. Neutral races are not immediately aligned to the Alliance or Horde and can choose to fight for either side after completing their racial starting content.

An Evoker can choose between two specializations: the fire and claw-focused “Devastation” spec, which focuses on dealing damage, or the healing-oriented “Preservation” alternative.

In addition to a new class, another key feature of Dragonflight is the inclusion of dragonriding: a unique twist on the game’s flight system. Typically, in WoW, you can fly in any direction you please without restrictions once you’ve attained the needed “riding skill” for a given region.

In the Dragon Isles, things appear to be a bit different. Your Drake companion — which is apparently visually and mechanically customizable — must constantly “fight against exhaustion” and the “pull of the earth” to stay afloat.

This means you’ll need to master skills like diving and gliding to get around instead of simply pointing your camera in a direction and pressing the auto-run key. Guild Wars 2’s Griffin has similar flight mechanics, and they are a joy to experience, if a bit clunky.

Blizzard hasn’t offered many additional details regarding WoW’s version yet, but it certainly sounds more exciting than what we have now.

The other two key features on deck here are the return of WoW’s long-dead talent trees and a revamped crafting system. The former works as follows: you get talent points at every level. These points can be allocated into both class and spec-specific trees, giving you bonuses to “offensive or healing powers.”

To be clear, his is not the same talent tree that WoW featured in its heyday early days. You used to get access to one talent tree per class specialization, and you could put points into whichever one you liked (or a combination of them all). You weren’t locked to a specific spec like you are now, but this is still a step in the right direction.

The new crafting mechanics are still a bit nebulous, but Blizzard says you can become a “Dragon Isles artisan” and fulfill crafting orders for your server. You can even unlock “specializations for your profession” and hunt down rare ingredients. Overall, it sounds like Blizzard is trying to spice up the otherwise-dull profession grind, and I certainly support that.

Finally, World of Warcraft is getting its first significant UI overhaul since launch. UI elements have been resized, the stonework action bar background has been removed entirely, and everything has been simplified overall. There’s a new “Edit Mode” function, too, allowing you to tweak the UI to your tastes.

As a WoW veteran, I think the UI revamp is a positive change. If you are unsatisfied with it, don’t fret. There will undoubtedly be user-made add-ons to restore the old look soon enough.

In other news, World of Warcraft: Classic is receiving (or re-receiving, if you will) the Wrath of the Lich King expansion, but we won’t go into details about that. It’s over a decade old now, after all.

Preorders for WotLK Classic and Dragonflight are not open yet, and we don’t have release dates for either yet. You can, however, opt-in to Dragonflight’s Beta right now for a chance at trying the expansion earlier than the rest of us.