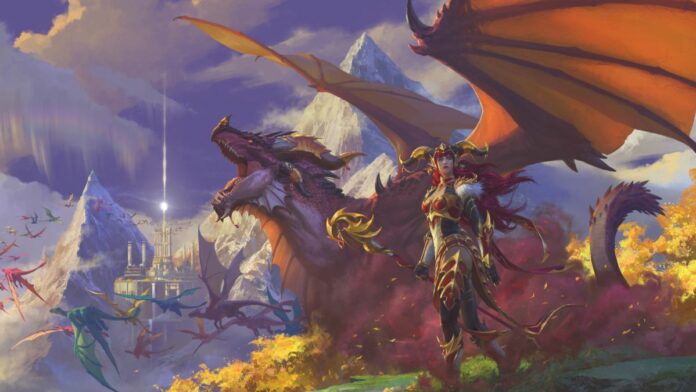 Blizzard’s announced its long-awaited 10.0 expansion, Dragonflight. Following scores of rumors, theories, and outright leaks, the developer’s confirmed that for World of Warcraft’s ninth expansion, we’ll be heading to the mythical Dragon Isles, a landmass lost to Azeroth for 10,000 years.

Dragonflight introduces the first race-class combo – the Dracthyr Evoker and a new method of traversing the skies of Azeroth – dragonriding. But the expansion isn’t only adding new toys, it brings a much-needed overhaul to World of Warcraft’s ancient systems. Progression will be revamped, with a new talent system designed to replace recent expansions’ weathered ‘borrowed power’ approach; a crafting rework gives gathering and production skills some much-needed love; and a full HUD update, the first in World of Warcraft’s 18-year history, sees the MMOs UI brought up to modern standards.

The Dragon Isles are a place of primordial wonder, focusing on elemental forces, ancient secrets, and the prismatic dragonflights we’ve encountered throughout World of Warcraft’s long history. Game director Ion Hazzikostas says the new continent is one of the largest landmasses the development team has ever created.

Tucked away in the northeast of Azeroth, the Dragon Isles were inaccessible for 10,000 years. Naturally, then, there’s a focus on exploration in this expansion – you’ll be making contact with races that have been undisturbed by outsiders for generations. Native Centaur, Gnolls, and Tuskarr all feature, as well as a new race of recently awoken elemental half-giants called Djaradin, whose animosity towards dragons will play into the story.

The Dragon Isles are home to four new zones: the Waking Shores, the Azure Span, Thaldraszus – home to the expansion hub city of Valdrakken – and the Ohn’ahran Plains, a location so large the team had to increase the game’s draw distance so you can experience its full, rolling vistas. The new landmass features diverse environments dotted with icy wastes, lush green land, volcanic crags, and sandy shores.

The stakes will be lower in this expansion, Hazzikostas tells us. There isn’t a grand threat to Azeroth in Dragonflight; instead, like in Mists of Pandaria, this is a story of discovery. We’re journeying to the isles not to combat a big-bad box-art boss but rather because the dragons have requested our aid. Hazzikostas confirms fan-favorite characters such as Khadgar, Tyrande, and Wrathion will feature.

It would be a poor dragon expansion if we couldn’t play as one. Announced as a ‘hero class’ akin to Death Knights and Demon Hunters, the new Dracthyr race begins at level 58 on a unique starting zone found off the shores of the Dragon Isles. They’re a bipedal race of dragon-humanoid hybrids with two forms, a more traditional draconid form and a ‘visage’ form that more closely resembles elves and men.

Dracthyr are locked to the new Evoker class, which features both a damage-dealing and healer spec, utilizing the fantasy and aesthetic of Warcraft’s prismatic dragonflights when casting spells. They’re the first class to feature the ‘empower’ ability to charge up spells for extra clout and can cast while briefly flying to traverse the battlefield. Hazzikostas describes the class as akin to a ranged variant of Legion’s Demon Hunter, focusing on mobility in combat.

Both the humanoid and dragon forms of Dracthyr will take advantage of World of Warcraft’s latest advances in character customization, with tweakable jewelry, horns, scales, hair (including ombré color fades), and more.

In the past, Blizzard has struggled with how armor should look on its more bestial races, such as worgen or tauren, but the team may have solved that problem. “In their humanoid visage forms, you’ll be able to wear the full set of armor that you normally would,” Hazzikostas says. “And unlike the worgen, who cannot be in their human form during combat, we are looking for players to showcase their humanoid forms during combat.

“Though, of course, abilities like a deep breath or a wing buffet will require that you are in your draconic form. We do want to allow for some armor carry-over, though yes, fitting a helm on the head of the dragon is not likely to happen. Something like shoulder pieces or having that direct carry-over is much more likely, and something the team is actively working on right now.”

Dracthyr will be available early in the Dragonflight pre-patch with pre-purchase of the expansion, and you will choose at their creation whether to be Horde or Alliance, though unlike Pandarans choosing their faction for story reasons, Dracthyr players will simply encounter that faction first based on their choice.

In Dragonflight, the team is dragonriding, a new form of flying that will be constrained to the Dragon Isles, at least initially. You’ll be able to level up its power, like a skill, over the course of the expansion.

Rather than World of Warcraft’s traditional flying, in which players listlessly hover towards their destination, dragonriding has a focus on momentum and gravity. It also lets you crack out rolls, spirals, and velocity changes as you soar through the skies. Hazzikostas says that the current design the team is looking at is limited by a stamina bar, which you can upgrade as you progress.

Early in the expansion, you’ll choose a dragon to befriend from a host of different options, and you’ll be able to further customize your mount as you discover upgrades and skins around the isles. While the team believes exploring the new continent on foot is the most fulfilling way to experience Dragonflight’s new zones, there’s a promising level of verticality in the new expansion’s environments that you’ll only fully appreciate from the air.

Blizzard has come under criticism for tying player power to some expansion-specific MacGuffin – like artifact weapons in Legion, the Heart of Azeroth in Battle for Azeroth, or covenants in Shadowlands. It’s something you level up over the course of the story, only to throw away when the next patch cycle begins. It’s been termed ‘borrowed power’ by the community and according to Hazzikostas, was put into place to fill the gaps left by the new talent system adopted in Mists of Pandaria.

In Dragonflight, Blizzard is returning to a talent tree system that will allow you to customize aspects of both your class and spec with points you earn when leveling up. Hazzikostas says Blizzard’s also considering a method of earning points after you reach the max level, but it hasn’t decided if this is the right route to take. The new system lets you swap points around freely, and even create builds for different scenarios, such as one for PvP, one for raid night, and one for mythic+. The team is aiming for zero borrowed-power elements beyond gearing and tier sets.

Blizzard’s also overhauling professions, and giving the UI a much-needed update. The quality of goods – which leads to higher item level gear, or better potion effects, for example – will now be an important factor, and you’ll be able to specialize within a profession to hone your craft. The example given was blacksmiths focusing on weapon or armor-crafting. You’ll also be able to equip crafting-specific gear in new slots to showcase your master-crafting skills to the world.

For the many players not as keen to engage with professions, the new crafting order system allows you to put in a request for an item once you have the necessary materials, and can even be limited to crafters in your friends list or guild. Soulbound items can also be crafted by other players for the first time.

It’s not just the profession UI that’s getting an overhaul: Blizzard is updating World of Warcraft’s 18-year-old UI to include functionality previously only available in add-ons. Early screenshots look similar to the popular ElvUI add-on, with the team promising a highly-customizable system that will focus players’ attention on the game in front of them, rather than health bars and cooldowns tucked away at the corner of the screen.

While the simultaneously-announced Wrath of the Lich King Classic is set to launch sometime in 2022, Dragonflight has no fixed release date. This is apparently due to learning the lessons of the repeated delays from Covid-19 and remote working. A playable alpha and beta are on the way, which you can sign up for through the Blizzard site, though beyond ‘ASAP’, timelines for both these and the final release are being kept secret for now.

It will be a hard wait, the systems due to be overhauled in Dragonflight have needed tending to for years, knowing they’re just over the horizon is going to be difficult to bear.