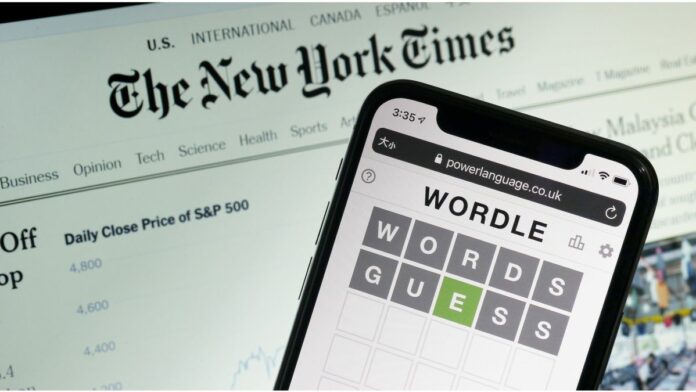 I used to think there was no best Wordle starting word. I was wrong and the new Wordle Bot just proved it to me.

While we’ve all been busy wasting a few minutes each day playing Wordle, the game that asks you to guess a five-letter word in six tries, The New York times quietly launched a Wordle Bot to help you in your quest to become a world-class Wordler.

In my first test run, I learned that, yes, there are some first Wordle guesses that are much better than others. I mean a lot better.

Before we continue, though, I’ll warn you that there are spoilers ahead for today’s Wordle answer No. 298.

As the New York Times explained, it built the bot with the express goal of finding the best starting words for Wordle, but that quest soon evolved into understanding “how closely our guesses matched those that would be chosen by a machine designed to solve Wordles.”

As a long-time Wordle player and someone who was for a bit writing our daily Wordle Guides and Wordle how-to’s (such as how to win Wordle every day), I think I already know a thing or two about the right starting words. One of my go-to’s is “FRAME.”

However, for this Wordle quest, I put myself in the hands of the Wordle Bot. Sort of.

To use Worlde Bot, it turns out, your first have to solve Wordle on your own. The bot literally turns you away if you haven’t solved Wordle on the system where you’re accessing the bot.

If you solved it on a different system, but still want the bot to analyze your work, you can upload an image of the completed Wordle.

Chastened, I returned to today’s Wordle and started to solve it. With or without a bot, I’m always determined to finish in three. Usually, I succeed. Today, not quite.

My progression is below in the gallery. Again, if you haven’t played Wordle today, stop, go play, and then come back.

Even though I failed to solve this Wordle in three, I felt pretty good about my results. I was curious if Worlde Bot would agree.

The bot starts with an overall analysis, which rates you on Skill, Luck, and Steps. I’m glad they have “Luck” in there because that is a big part of the game, especially on that first word where, if you’re lucky, you could pull in four letters or even a complete word. If your guess took you a great leap forward in solving the puzzle, that increases your “Luck” rating.

Skill is about how your guesses reduce the number of turns it might take to solve the Wordle.

Steps is just how many turns it took you to guess the day’s Wordle. My ratings, which compare me to the average of all New York Times Wordle players, are below.

I’m not gonna lie, the 77 Skill rating is a little disappointing. I don’t like being “below average.”

The best part of the Worlde Bot is its step-by-step analysis, and this is where I learned what may be one of the best starting words of all time.

It turns out that “CRATE,” a word I have rarely used in this game, is an exemplary starting word. It cuts the number of possible Wordle guesses from 2,309 to 73. That’s some solid work there and I think I will use “CRATE” again in the future.

My second guess might appear to be a poor one because it doesn’t use the single letter I got right in the first guess. However, this is my tried and true strategy of building a Wordle win in three by collecting as many additional letters as I can in guess two.

Wordle Bot doesn’t speak to that strategy but notes that “POUND” is an excellent choice because it cuts the number of possible remaining answers roughly in half.

What I started to realize is that I’ve been thinking wrong about winning Wordle all along. It’s not so much finding the word through letter elimination and addition but by, with each turn, radically altering the number of possible guesses remaining.

Wordle Bot is also there to let you know, as gently as possible, when you made a mistake, and in my next guess, I chose wrong.

“CLUNK” was a bad choice for so many reasons. It’s not an obvious word and, as Wordle Bot notes, I eliminated one of two remaining choices – but the wrong one.

With one option left, Wordle Bot informs me, without sarcasm, I believe, that I should solve this on my next guess.

I had literally one choice and, yes, I got it.

Wordle Bot is a bit of a show-off. Its final act is to compare your solution to how it – a robot, mind you – would’ve solved it.

Wordle Bot would’ve gotten the answer in three tries. Good for you, Wordle Bot, good for you.