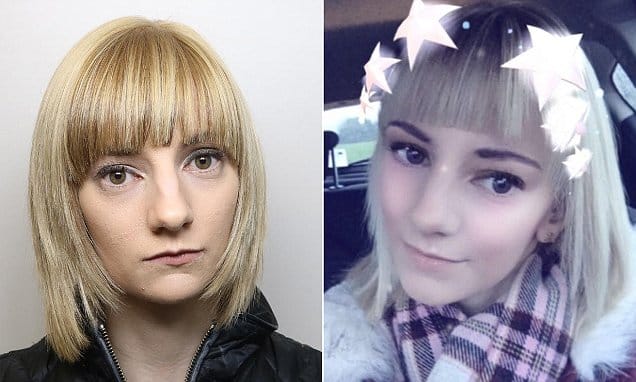 Rebecca Palmer, from Swindon, Wiltshire, was found guilty at Winchester Crown Court of four offences of perverting the course of justice

A WOMAN has been jailed after falsely claiming that she’d been raped by a soldier after he “rejected her”.

Rebecca Palmer, 26, was found guilty at Winchester Crown Court of perverting the course of justice after putting the squaddie through hell.

The court heard how she slept with the man consensually, but pretended to officers investigating her fake claim that she was pregnant.

Palmer then later claimed under further questioning that she lost the child in a suicide attempt.

Joanne Jakymec, chief crown prosecutor, said: “Rebecca Palmer indulged in consensual sexual activity with the victim, but on being rejected by him embarked on a malicious campaign which led to him being arrested on more than one occasion and held in custody for periods of time.

“She repeatedly made false allegations, including that of an allegation of rape, and sent malicious communications to both the victim and members of his family.

“The jury at Winchester Crown Court heard how the defendant became so embroiled in her own lies that she told others, and the police, that she was pregnant but on questioning claimed to have lost the baby during a purported suicide attempt.

“She invented fake friend profiles and produced false correspondence hoping that these would be accepted as supportive evidence of her false claims.

“She falsely claimed that the victim had taken revenge on her by posting intimate pictures of her on Facebook.”

Ms. Jakymec added: “Rape is a very serious offence and this case should not detract genuine victims of this crime from coming forward and reporting.

“Our thoughts go to the victim in this case and we hope that this verdict will allow him to move on.”

A Wiltshire Police spokesman said: “Palmer’s behavior has been completely unacceptable and she has shown no regard for the level of upset she has caused to others.

“Palmer became completely embroiled in her own web of lies and her appalling behavior could really have a negative impact on victims of rape or sexual assault who may choose not to report it to police for fear that they will not be believed.

“I would like to reassure victims of sexual assault that we take all reports extremely seriously and would encourage anyone who has been a victim, regardless of how much time has passed since the offence, to come forward and report it to police on 101.”She also pleaded guilty to five offences of malicious communications and three offences of perverting the course of public justice. Palmer, of Swindon, Wilts, was jailed for five years.