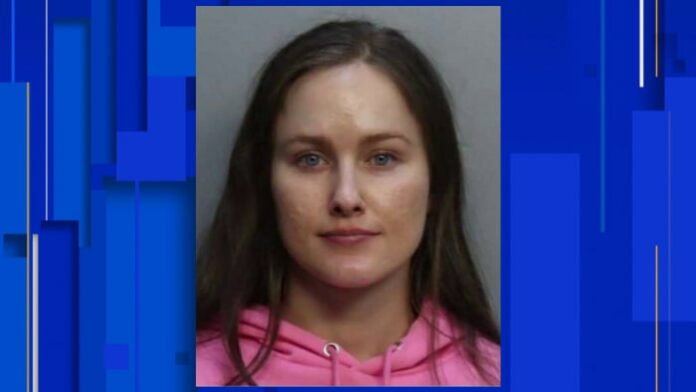 MIAMI – Police have made another arrest over the balloon-popping incident in Biscayne Bay, according to News 6 partner Local 10.

Miami-Dade police confirmed Friday that Martina Gaspoz, 26, has been arrested on a felony charge of willful disregard for the environment.

Police have already arrested one man on a charge of reckless disregard for the environment.

“Because of the awareness that Channel 10 has brought to this matter, we are getting tips,” Miami-Dade Police Interim Director George Perez said. “And that’s just another testament to our community, trusting its police department, working together with its police department … We’re so glad that Louis Aguirre featured this and amplified the voice of the original poster, and we took immediate action.”

David Torres-Bocanegra, 29, of Homestead, who was the first to be arrested, was also fined $2,510 for illegal dumping, and is at risk of facing up to $10,000 in fines and time in jail.

Nine others — including Dessideria D’Caro De Capriles, the owner of the charter yacht that the incident occurred on — are facing about $23,000 total in fines.

Torres-Bocanegra told detectives Wednesday that he was the man who dropped about 50 balloons into the water on Tuesday at the Bayshore Landing Marina in Miami’s Coconut Grove, according to his arrest form.

“Jesus is alive,” Torres-Bocanegra said after walking out of jail on Thursday afternoon. When reporters asked him if he cared about the environment, he said, “Of course!”

A witness, who was appalled, recorded the video and shared it on Instagram. Environmentalists were outraged. Marine animals often mistake the nonbiodegradable deflated balloons for jellyfish. Turtles eat it. Seabirds feed it to their young.

According to her arrest report, Gaspoz confessed to popping balloons on the boat, initially with the help of Torres-Bocanegra, and then later with help from the captain of the boat.

She said she spotted a news crew filming nearby as she was leaving the boat, and “felt ashamed of what they had done since she had seen the social media posts, and (she) tried to avoid the media,” the report stated.

Tom Rivas, a Miami fitness coach, entrusted the planning of his romantic proposal on the yacht to Cloud Nine, a family-owned company that alleged a vendor dealt with the balloons and they were not involved in the disposal.

Officers issued Cloud Nine and HD2 Yacht Service each a $2,510 civil citation. Also, Gabriela Castillo, the event coordinator, and Francisco Feo, the person in charge of the charter company, each received $2,510 citations.

In the wake of the balloon issue, an online petition was started with the goal of having balloons banned on beaches, boats and coastal areas of Miami.