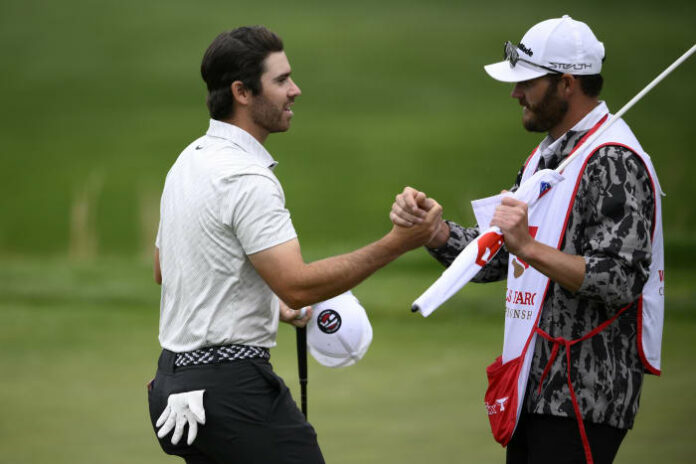 POTOMAC, Md. – Matthew Wolff’s last two competitive rounds were an 81 and a 78 at the Masters, where the 23-year-old long hitter finished behind every 60-something past champion in the field. He played a casual round at his home club a few days ago and lost every ball in his bag.

Beware the golfer with nonexistent expectations.

Playing with freedom and joy, Wolff bogeyed the par-5 second hole at TPC Potomac at Avenel Farm but was flawless from there, shooting an opening-round 65 on Thursday to share the early lead at the Wells Fargo Championship.

“I can go out and shoot 90 tomorrow and as long as I have a good attitude, I can put a check mark on this week and say that I’ve grown as a person and as a player and that’s just all I really care about right now,” Wolff said. “To be honest, it’s funny, but I’m not here to win a golf tournament, I’m here to have a good time.”

Joining Wolff atop the leaderboard were local favorite Denny McCarthy and two PGA Tour rookies from England, Aaron Rai and Callum Tarren. K.H. Lee, Nick Watney and Adam Svensson each shot 66. Rory McIlroy, the top-ranked player in the field at No. 7, was two shots back after an up-and-down 67.

Wolff won his third professional start after leaving Oklahoma State three years ago and finished second in the 2020 U.S. Open at Winged Foot. With his prodigious length and unusual, herky-jerky backswing, he seemed the archetype of a new generation that cared more about results than aesthetics.

Until the results evaporated. Wolff has been frank about his struggles with mental health, the pressure and expectations he felt trying to keep up with Collin Morikawa and Viktor Hovland as a face of golf’s future.

“It’s hard because the down times that I’ve had, I’ve had to do it in front of everyone,” Wolff said. “If you have down times in college or mini-tours or Korn Ferry tours, which is where I’d probably be right now if I hadn’t turned pro, it’s a little easier to overcome those because you don’t feel like you’re fully in the spotlight.”

Wolff appeared to turn the corner this past fall with a runner-up finish in Las Vegas, but his scores ballooned again in 2022. Even including Thursday, he has more rounds this year in the 80s (three) than the 60s (two).

“If I get in a spot where I’m in contention or if I’m by the lead, I’m sure going to feel nerves, but those are the nerves that I like to feel,” Wolff said. “I don’t like to feel the nerves of other people or trying to please people.”

Wolff played only nine holes to prepare at TPC Potomac, shooting 4-under 31 on a back nine he had never seen.

McCarthy, who was born in nearby Rockville and graduated from Georgetown Prep and the University of Virginia, is treating this one-and-done hometown Wells Fargo Championship more like a major. He played nine holes each of the past four days.

The gallery following McCarthy — many times larger than the “single digits” he said he usually attracts on a Thursday or Friday — also sharpened his focus.

“It felt like a Sunday a little bit, honestly. I think that’s only a good thing. I felt really comfortable. If I’m in that spot on Sunday, I got a little taste of it today,” McCarthy said. “There was a decent amount of people following and I could feel the energy.”

The Wells Fargo is being held at TPC Potomac because its usual host, Quail Hollow in Charlotte, North Carolina, is hosting the Presidents Cup this year.

McIlroy, who won his third title at Quail Hollow last year, appears equally comfortable at hilly, tree-lined TPC Potomac. His only big mistake was a tee shot that started too far left and drew into the water on the par-4 fourth hole, his 13th of the day. A penalty drop and a sloppy chip led to double bogey.

He birdied the next two holes and was on his way.

“I said to myself walking off the green, if I could just get back to 3 under for the day by the end of the day after that, I would be pretty happy, and obviously I did that,” McIlroy said.