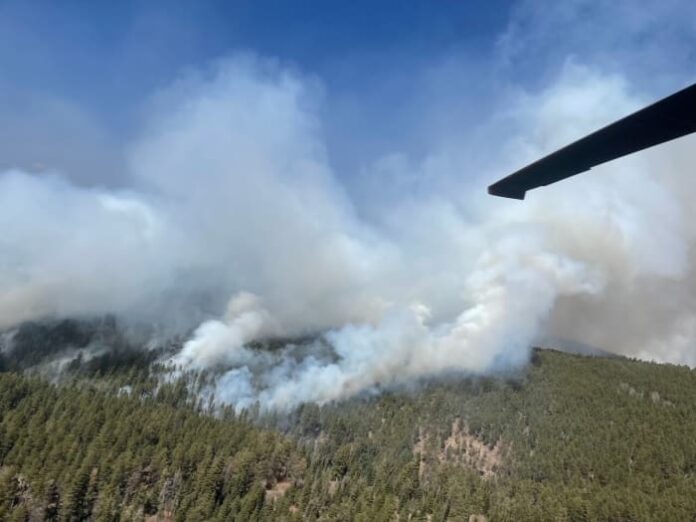 The blaze burning in the foothills of the Rocky Mountains near the small northeastern New Mexico city of Las Vegas is the biggest wildfire in the U.S. and has charred more than 188 square miles (487 square kilometers). Fire officials said they expect it to keep growing, putting the fire on track to be one of the most destructive in the state’s recorded history.

“Winds are changing constantly and those, combined with low humidity and high temperatures keep the fire spreading at dangerous speeds and in different directions,” officials warned in a fire update. “Over the next two weeks, the majority of our days are listed as red flag days, with high winds, which will continue to make suppression efforts difficult.”

The fire has been fanned by an extended period of hot, dry and windy conditions and ballooned in size Sunday, prompting authorities to issue new evacuation orders for the small town of Mora and other villages.

Residents in some outlying neighborhoods of Las Vegas, population about 13,000, were put on notice to be ready to leave their homes as thick smoke choked the economic hub for the farming and ranching families who have lived for generations in the rural region. It’s also home to New Mexico Highlands University and is one of the most populated stops along Interstate 25 before the Colorado state line.

“We are working hard around the clock to make sure all the services are ready for the public,” Las Vegas Mayor Louie Trujillo said at an emergency meeting Sunday, noting that winds were expected to push the fire closer to the city on Monday.

Across New Mexico, officials and groups were collecting food, water and other supplies for the thousands of people displaced by the fires. Offers of prayers and hope flooded social media as residents posted photos of the flames torching the tops of towering ponderosa pines near their homes. Some of those living close to the fires described the week that the fire has raged nearby as gut wrenching.

Forecasters have issued fire weather watches and red flag warnings for extreme fire danger across wide swaths of New Mexico and western Texas. Wind advisories were also issued for parts of Nevada, California and southern Oregon as gusts threatened to fan any new wildfires that emerge.

Officials have said the northeastern New Mexico fire has damaged or destroyed 172 homes and at least 116 structures.

It merged last week with another blaze that was sparked in early April when a prescribed fire escaped containment after being set by land managers to clear brush and small trees in hopes of reducing the fire danger. The cause of the other fire is still under investigation.

Another New Mexico wildfire burning in the mountains near Los Alamos National Laboratory also prompted more evacuations over the weekend. It has reached the burn scars of wildfires that blackened the region a decade ago when New Mexico had one of its worst and most destructive seasons.

One of the state’s most destructive fires in 2000 forced the closing of the laboratory and left about 400 people homeless. The community was threatened again in 2011 when another blaze caused by a downed power line blackened more of the surrounding forest.

In the southern New Mexico community of Ruidoso, two people were killed in a wildfire that destroyed more than 200 homes.

And new wildfires were reported over the weekend — three in Texas, two in New Mexico and one each in Oklahoma and Tennessee, according to the National Interagency Fire Center. More than 3,100 wildland firefighters and support personnel are fighting fires across the country, with about one-third of them trying to prevent the big blaze in New Mexico from spreading.

The blazes are among many this spring that forced panicked residents to make life-or-death, fight-or-flee snap decisions as wildfire season heats up in the U.S. West. Years of hotter and drier weather have the exacerbated blazes, leading them to frequently burn larger areas and for longer periods compared with previous decades.

Wildfires have become a year-round threat in the West given changing conditions that include earlier snowmelt and rain coming later in the fall, scientist have said.

The problems have been exacerbated by decades of fire suppression and poor management along with a more than 20-year megadrought that studies link to human-caused climate change.