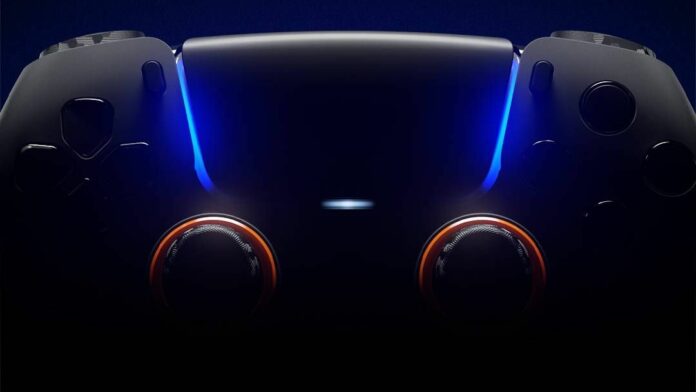 Anyone who’s been fortunate enough to get their hands on a PS5 will agree that, along with its super-fast SSD, the DualSense controller is one of the console’s best features.

Despite the fact that Sony’s PS5 DualSense has pushed the boundaries of modern gamepads to a whole new level, it still has a few setbacks that could have been addressed with a more premium model.

While Sony still refuses to play ball, we’ve put together several reasons as to why we think that a PS5 pro controller would make sense. Maybe, just maybe, we can manifest one into existence ourselves.

The DualSense battery life could be improved

Since the PS5’s release, the DualSense gamepad is considered to be one of the best controllers in gaming, even winning an online poll as part of the recent BAFTA Games awards.

And it’s easy to see why it’s so highly regarded when you take a closer look into the features that make up the generational leap between the DualSense and the PS4’s DualShock 4.

The BEST CONTROLLER EVER TOURNAMENT (our friendly competition!) has come to an end, and you have decided the ultimate winner with the DualSense taking the crown 🥇🎮Reminder: you can watch the #BAFTAGames Awards on 7 April 2022 on all major social and online platforms🏆 pic.twitter.com/wGH5zKdosIMarch 27, 2022

We’ve said it before and we’ll say it again until we’re blue in the face: the inclusion of haptic feedback and adaptive triggers in the DualSense controller has been one of the biggest highlights in the latest generation of gaming consoles.

But the PS5 controller isn’t perfect by any means and does have its fair share of flaws. Currently, one of the biggest issues that PlayStation gamers tend to encounter is having to deal with the DualSense’s mediocre battery life which varies wildly between six to 12 hours of playtime. Frustratingly, it also appears that the aforementioned adaptive triggers and haptic feedback have the biggest impact on the controller’s battery life.

While you do have the choice to turn off adaptive triggers and haptic feedback, or at least reduce their intensity, it’s a shame to have to resort to depriving yourself of one of the best parts of gaming on a PS5 just to get a bit more juice when gaming.

Since Sony still seems to be reluctant in creating a Pro version of its DualSense controller, third-party manufacturer Scuf has stepped in to save the day. At the moment, Scuf offers PlayStation gamers a choice between three gamepads: the Scuf Reflex, Reflex Pro, and Reflex FPS – all decked out with slightly varying specifications.

And despite their relatively high cost of $199.99 / $229.99 / $259.99, the Scuf PS5 pro controller proves that there’s high demand for a premium PS5 controller. So much so, that all three variations of Scuf’s gamepads have sold out and still remain out of stock almost a month after their initial release.

All three of Scuf’s PS5 pro controllers include remappable paddles and interchangeable thumbsticks. This gives gamers more flexibility in terms of reassigning key actions to different button inputs to best fit their playstyle.

Given the price and appeal of the Scuf gamepads, it’s obvious that should it ever be released, a PlayStation-brand elite controller likely won’t be aimed at the average console gamer. Instead, it would cater to a smaller, more dedicated portion of PS5 owners that play online first-person shooter games such as Call of Duty: Warzone or Destiny 2, where improved hardware can give players a competitive edge.

If you’re anything like me, though, and spend the majority of the time playing story-driven games like Lego Star Wars: The Skywalker Saga or Resident Evil: Village, chances are you won’t really need a PS5 pro controller. Still, I wouldn’t say no to a controller that has a longer battery life than the original DualSense and offers more flexibility.

Xbox has had pro pads for years

Parents and school teachers spend a significant chunk of our childhood telling us that just because someone else does something, that doesn’t mean you should do it yourself. While that’s generally good advice when it comes to jumping off cliffs, in this scenario I couldn’t disagree more.

Microsoft’s original Xbox Elite Wireless Controller and its successor have been available for years and are proof that console gamers want an upgrade on the original gamepad – even if it costs a premium.

In our Xbox Elite Wireless Controller Series 2 review, we mentioned how it provides users with a heftier design that’s centered around customization all the way down to the system level. This means that Xbox owners can freely adjust everything from stick sensitivity to vibration and brightness, in addition to having four extra back buttons to reassign various actions to.

While it can seem like a challenge to build any further on the already great DualSense controller, I don’t think it’s too outlandish to ask for an official pro-level PS5 gamepad from Sony that offers the same level of customizations as the Xbox Elite controller.

It’s unclear why Sony doesn’t want to follow suit, honestly, as many of the biggest games on PlayStation are competitive online games. Although the release of the admittedly clunky DualShock 4 back button attachment for the PS4 was better late than never, it’s not currently compatible with the PS5. A PS5 version of this peripheral would at least be a step in the right direction, then, at least until Sony hopefully decides to make a pro pad of its own.