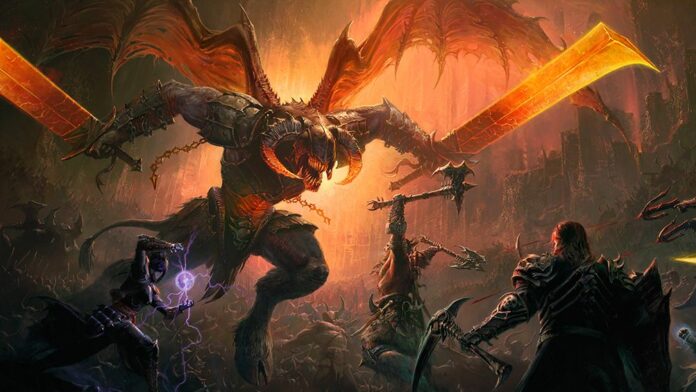 After spending the last three years insisting that Diablo Immortal will be a mobile exclusive, Blizzard revealed last month that it was bluffing all along. The next entry in the infernal action RPG series is, in fact, coming to PC, and will release on both platforms next month.

That’s exactly what fans wanted. Skeptics had initially balked at Diablo Immortal’s mobile exclusivity, but many have been won over now they know they can face Sanctuary’s fiends using a mouse and keyboard. Others had worried the game would be little more than a pared-down Diablo clone created for the mobile market, but are now excited at the thought of playing the first original Diablo release in five years.

The announcement of Diablo Immortal’s PC port has certainly done wonders for the game’s image, but it’s a good thing that it started life as a mobile exclusive. As game director Wyatt Cheng tells TechRadar, by designing the game for mobile, the team was able to explore new design principles and experiment with novel gameplay concepts that were beyond the reach of past Diablo titles.

“Senior combat designer Julian Love and I worked on Diablo 3 together, and back on Diablo 3, we really wanted to have affixes [modifiers that grant bonus abilities to your character and enemies] that played around a little bit with your movement,” Cheng says.

“There was one monster affix that we wanted to do at the time, but we didn’t, which was Icy Ground – the idea that you’re kind of skating around.”

It’s a simple concept and one that may not strike you as particularly challenging to implement. Platformers like Mario, Kirby and Rayman have had players sliding across slippery surfaces for decades, but Cheng says Diablo’s traditional, indirect control scheme made the feature tricky to implement.

With players controlling their character’s movement by pointing and clicking around the map, the game’s auto-pathing takes over to compensate for the icy ground beneath them. Pointing your character to walk across a frozen lake, and watching as the game automatically takes care of the slippery surface, doesn’t feel nearly as engaging as it does to directly control their movement and slide your way across the tundra.

“But with Diablo Immortal,” Cheng says, “we thought, ‘Hey, we know that we’re a mobile-first game, we’re going to have most people [using] direct control; let’s go ahead and add the Icy Ground property.’ And now you really feel like you’re sliding around on a slippery surface.”

Designing for mobile allowed the team to play around with other gameplay mechanics, too. It let them use the tactile interface of a phone screen to explore new combat features that weren’t compatible with the mouse-and-keyboard setup of past Diablo games.

“We have what I call charge-up skills,” Cheng says. “Arcane Wind for the Wizard is a great example. You press down on the Arcane Wind button, and as your thumb holds that button down, it starts to charge up. The damage increases the longer you hold it down, and the area-of-effect increases. But you can also aim it while it’s charging up. And through all of that, you can move your character around to really line up that perfect shot.

“This is something that we couldn’t do with just a mouse input, and so that was an opportunity that we wanted to take advantage of. It’s also why we added WASD keyboard control for people who wanted to be able to do that.”

Diablo Immortal will be the first game in the series to support a WASD-based control scheme, letting you move your character about the map with your left hand, while freeing up your right hand for more intricate combat maneuvers. That means fights will no longer be prolonged static wrestles. You’ll be able to aim your weapons, charge-up spells, and unleash each blow while circling your enemies for the best possible position.

It’s a big change for the series. While Diablo 3 on PS4, Xbox One, and Nintendo Switch allowed for this kind of direct control by tying your character’s movement to the analog stick, a WASD-based control scheme was never implemented for the PC version of the game. Even other massive contemporary RPGs, such as Divinity: Original Sin 2 and Baldur’s Gate 3, have been slow to move away from the traditional point-and-click control scheme that’s hallmarked the genre for decades.

But while creating a Diablo game for mobile has given the team some room for experimentation, it’s also thrown up a few challenges. Inventory management, for example, is tricky to implement when players can’t hover over items with a cursor to reveal their descriptions and stats. Whether you’re playing Diablo Immortal on mobile or PC, you’ll have to tap items to pull up their descriptions.

“And that immediately [makes people go], ‘Oh, this is a game that was built for [a] mobile-first client,’” Cheng says. “But the advantage of that is that the game is identical. When you go back and forth [between the mobile and PC version], we have complete feature parity. There’s no hidden functionality that’s available on one platform or another.”

That feature parity is all part of Blizzard’s attempt to present Diablo Immortal as a fully-fledged action RPG that can stand alongside its PC siblings. As general manager of the Diablo franchise Rod Fergusson says, the team’s main goal in creating Diablo Immortal was to bring a triple-A experience to mobile devices; to create a mobile game that would not only rival the series’ past releases, but continue to outpace them.

“Diablo Immortal is probably the most ambitious Diablo game we’ve done to date,” Fergusson says. “And it’s something that we’re really excited about. Part of the free-to-play nature of the game is [the] support for the game as we go beyond launch, and we look at new zones, new dungeons, even new classes. All those will be available for free, as we continue to support Diablo for years to come.”