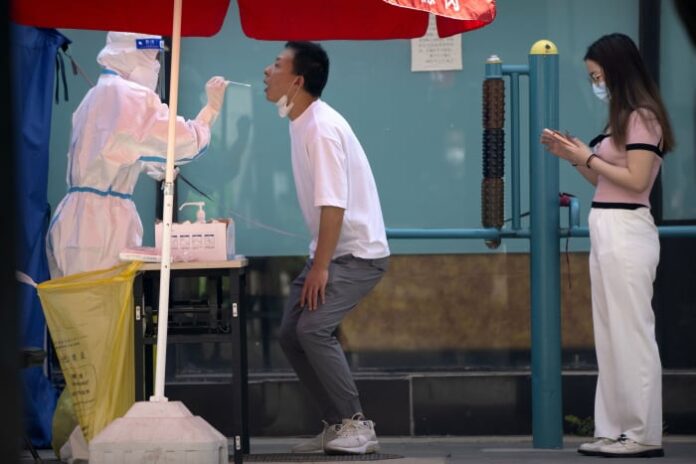 GENEVA – The World Health Organization said Wednesday that the number of newly reported coronavirus cases and deaths globally continued to fall in the last week, continuing a decline that first began in March.

In its weekly report on the pandemic, the U.N. health agency said there were about 3.8 million new infections and more than 15,000 deaths last week, a 17% and 3% drop on the week respectively. But those figures are believed to be a significant underestimate of COVID-19’s true toll as increasing numbers of countries abandon widespread testing and surveillance.

Still, the WHO noted that cases rose by about a third in Africa and 13% in the Americas. There was also a nearly 70% jump in deaths reported in India, although that was attributed to delayed reporting rather than a recent surge of disease.

Last week, authorities in South Africa said they had noted an uptick in COVID-19 cases attributable to the BA.4 mutant of omicron, although they said it was too early to tell if that would result in a significant new wave of disease. Although the BA.4 version of COVID-19’s omicron variant appears more infectious than omicron, the WHO said there was no evidence yet that it was leading to substantially higher rates of hospitalization or death.

Salim Abdool Karim, a public health expert at the University of KwaZulu-Natal, said that while only a “modest” rise in cases had been noted, South Africa was also in the middle of a holiday period and testing had dropped significantly. He said the cases were slowing and were “not following a rocket-like upward trajectory we would expect” in another spike of disease.

At a press briefing on Wednesday, WHO emergencies chief Dr. Michael Ryan said it was soon to tell if COVID-19 was entering a seasonal pattern and warned against countries dropping all of their restrictions too quickly — as many in the West have done.

“The jury is still out as to how seasonal this virus will become,” he said, explaining that it wasn’t proven yet that COVID-19 would naturally drop off in the summer and that the world could yet face more unsettling variants. “If people are crowded together in conditions where a new variant is spreading, you will see high levels of transmission,” he said.

Meanwhile in China, authorities continued to crack down on cities including Beijing, where more than 10% of the subway system was shut down in an effort to curb the virus’ spread, after authorities in the capital already closed down indoor dining, gyms and school classes.

In Shanghai, rigid and widely derided restrictions have led to shortages of food and medical aid along with a wider — though likely temporary — impact on the national economy. Desperate, outraged citizens have confronted authorities at barricades and online, screamed out of their windows and banged pots and pans in a sign of frustration and anger.