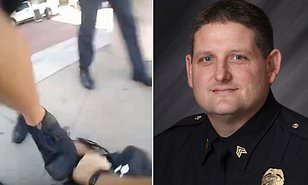 An Indianapolis Metropolitan Police officer is facing federal charges after shocking bodycam footage showed him stomping on the face of a suspect while already in handcuffs.

Sergeant Eric Huxley then walks up and kicks Jermaine Vaughn, 38, in his face despite the man already being on the ground.

Sgt Huxley and two other officers approached Vaughn, who is homeless, after hearing him shouting but when he ‘refused to quiet down’, they placed him in handcuffs. Charges against him for disorderly conduct and resisting law enforcement were later dismissed.

The officer appeared before a federal grand jury who returned an indictment charging him with deprivation of rights under color of law.

Huxley already faces charges locally over his actions during the arrest of Jermaine Vaughn which occurred in September 2021.

Body camera footage of the incident sees Vaughn having an argument with another officer before being forced to the ground.

The officer said Vaughn was being uncooperative. ‘The man is on his backside on the ground, looking up. Shores with his hands cuffed behind his back.

‘Sgt. Huxley then walks over to him, lifts his left leg and drives his left foot down into face. Within seconds, blood is visible in in his mouth,’ reads the affidavit.

He was then rolled over onto his stomach and searched as his pants slid off. The video blurs his exposed backside.

The kick to the head, and the body-worn camera video that recorded it, are the reasons why Huxley, a 14-year veteran, is now facing termination and felony charges of battery and official misconduct.

It further alleges the offense resulted in bodily injury and involved the use of a dangerous weapon.

During the takedown an officer can be heard saying to Vaughn, ‘We’re not gonna do this, right?’

After Vaughn is kicked and appears dazed on the ground, another officer can be heard telling him, ‘You’re done,’ at least four times.

It was nearly two weeks before IMPD Chief Randal Taylor became aware of the incident which was discovered through IMPD’s standard Blue Team Use of Force reporting system.

Huxley now faces termination together with felony charges of battery and official misconduct.

Huxley was suspended without pay during the local investigation.

‘This incident was unnecessary and should have never occurred. I would not tolerate this behavior from any community member; Sergeant Huxley is no exception. As law enforcement officers, we must understand that this behavior violates the community’s trust. We have confidence the judicial system will bring justice to the man and his family,’ said Chief Taylor.

‘Honestly, I’m here with a heavy heart,’ Taylor said, during a press conference last Tuesday before showing the bodycam footage.

‘This video is going to make you as upset as it did me,’ the 34-year veteran of the police force said. ‘There’s no excuse for it.’

Taylor said he released the bodycam footage because, ‘transparency is one of those things that we’ve been striving for’.

‘We’ve done that because we want to build the correct relationship with the community that we need to have.’

A civilian-led merit board will also help to make the final decision on Huxley’s employment with the force.

The city, police department, and the police chief are also facing a separate federal lawsuit.

The suit claims two of the officers who reported Huxley for his alleged actions faced retaliation for doing so.

Acting U.S. Attorney John Childress said his office is aware of the incident, and an FBI investigation has begun.

‘If the investigation reveals prosecutable violations of any federal criminal statutes, the Department will take appropriate action,’ Childress said in a statement.

‘The video in this incident speaks for itself,’ Marion County Prosecutor Ryan Mears told Fox 59 News. ‘I think in a case like this it’s very helpful as it depicts the events, what led to the encounter between the two individuals, and you can really kind of see the events as they progress in real-time.’

The other two responding officers – Sgt. Christopher Kibbey and officer Matthew Shores – have been placed on administrative duty until the end of the investigation