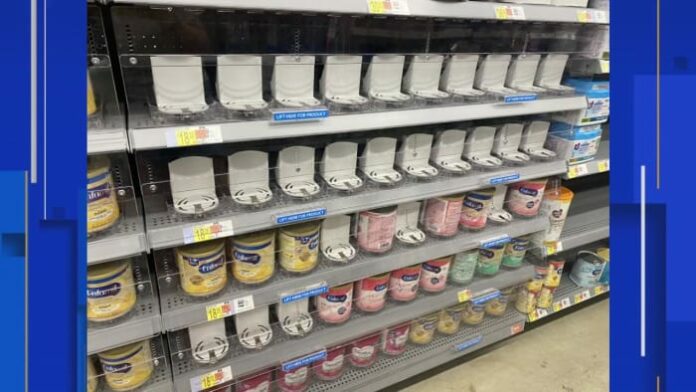 ORLANDO, Fla. – An Orlando pediatrician is answering all the questions parents impacted by the national baby formula shortage have.

Dr. Candice Jones has heard from parents struggling to find baby formula and how they are trying to make the formula they already have last by not following the proper instructions on the back of the can.

“Sometimes parents do not know that they are messing up on that recipe,” Jones said. “If we’re using less powder or too much water we can create imbalances that can be harmful to your child.”

Jones said by adding less baby formula, a child can develop anemia or electrolyte imbalances, which can cause seizures.

But what about a milk substitution?

“Those milks don’t meet the proper nutritional needs of an infant under 6 months. Cow’s milk, nut milks, soy milk, toddler formula—those types of substitutions are not recommended,” the pediatrician said. “Your baby can have problems with growing. They may not gain weight appropriately and that can affect their development their brain growth.”

And online do-it-yourself recipes can be harmful, too, Jones said.

“There are recipes floating around that you can DIY or make your own formula and that can be very dangerous. It is very difficult, and in my opinion, almost impossible to get the right mix of nutrients, minerals,” she said.

A major factor that’s contributed to the shortage is Abott Nutrition’s recall of three of its top-selling baby formula brands.

In a statement, the company recognized the recall worsened the infant formula shortage and said its working to increase supply at their other FDA-registered facilities by bringing in Similac from their site in Ireland and producing more liquid Similac and Alimentum.

The company recently announced it could reopen their Michigan facility within the next two weeks, subject to FDA approval, after having closed it in February. Consumers, however, wouldn’t see products on shelves for about six to eight weeks after the plant reopens.

The location shut down after four complaints of “Cronobacter sakazakii — a common environmental bacteria — in infants who consumed infant formulas produced in this plant,” resulting in two infants dying and another two getting sick.

Upon further investigation conducted by state, Food and Drug Administration and Centers for Disease Control and Prevention officials, all unopened samples of the Abbott formula used by the affected infants tested negative for the bacteria.

One opened container tested positive for the bacteria, but no positive strains were found in the Michigan plant, the company said.

“The FDA concluded its inspection with a 483 letter to Abbott on March 18. This is a list of observations that point out where Abbott did not follow our processes and where we can improve our systems and protocols,” the company said in an updated announcement.

Abbott said it takes the letter very seriously and are taking corrective actions.