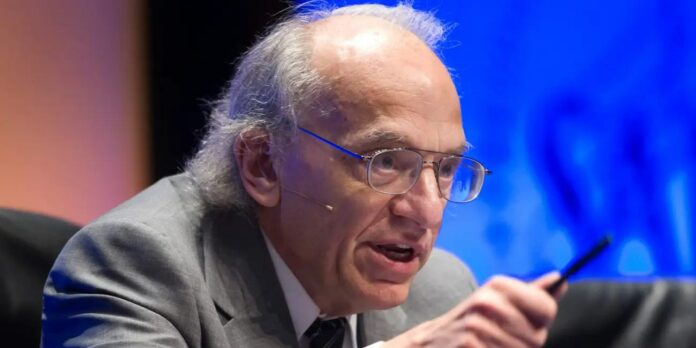 “One thing [Powell] said was: ‘despite the tighter policy and slower growth over the past year, we have not seen clear progress on slowing inflation,” Siegel said to CNBC’s Scott Wapner. “You know, very honestly Scott I don’t know what planet he lives on!”

“There’s tremendous evidence of slowing inflation,” Siegel said, pointing to falling home prices, a decline in housing rents, and a drop below 50 on the ISM index. Additionally, Siegel noted that while wages are growing at about 5% year-over-year, that’s still well below the year-over-year inflation rate of 8%.

“Workers are trying to catch up and they’re not. They’re still falling well behind. It just disturbs me to think that the Fed policy is to crush wages so they go back down to 2%, basically saying to the worker ‘you’re not going to catch up to inflation, and we’re going to prevent you from catching up to inflation.’ That’s an insane policy,” Siegel said.

Siegel also took issue with the fact that the Fed’s quantitative easing actions in 2020 and 2021 are mainly responsible for driving the inflation that they are now trying to quell.

“Yes, I’m very critical of the Fed. To be blunt, here’s a Fed that caused the inflation by expanding liquidity greater than any other time in history, is basically talking as if, to the worker ‘we’re not going to let you catch up to the inflation that I caused.’ That’s a slap in the face to the American worker, in my opinion. I just don’t think that is justified…. Is that good public policy?” Siegel asked.

Siegel said that when you replace lagged components of the CPI report with on-the-ground rental prices and housing prices, inflation is actually negative, not positive.

“You have to be forward looking, you can’t be backwards looking when you’re implementing policy,” he said.

He concluded: “Remember a year ago in September, Jay Powell said: ‘No increases in Fed funds will be necessary for 2022.’ This was in September of last year. So now, when they increased it how many times, are we now to believe that they know what is going to happen in 2023? No. They’re just going to follow the data.”