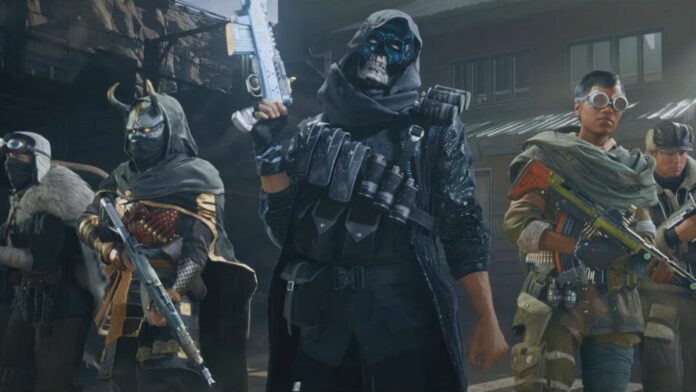 A huge Warzone update is imminent with the release date of Season 3 upon us. Activision is revealing tons of information about what’s coming to its mega-popular battle royale. Including, both Godzilla and King Kong, in what promises to be a mammoth battle in the Pacific.

As with the launch of any new season of Warzone, at the top of your agenda should be avoiding a swift trip to the gulag; second on the list is figuring out what changes are coming to the Pacific island of Caldera.

Warzone Season 3 is called ‘Classified Arms’ and it introduces new weapons to back that name up. Though, whether they’ll be of much use against the oversized threats is a big question. Nebula bombs have been exploding around Caldera, and they’ve set loose some familiar giant-sized creatures rampaging. Godzilla and King Kong have been marching around Caldera Island leaving their imprint on the land. And they’re even going to get their own event, called Operation Monarch. Hints to the event are scattered all over the map, including weird ancient cave paintings and an ‘otherworldly axe’.

Expect a new level of loot and scoot in your future if you want to survive and overcome the challenges Warzone Season 3 throws at you.

Warzone update: cut to the chase

Activision has revealed the Warzone season 3 release date is April 27 at 9am PST/12pm EST/5pm BST, 2am ACT.

The new season’s launch will come to Xbox One, Xbox Series X|S, PS4, PS5, and PC simultaneously. As ever, it will be cross-play across all platforms.

Warzone Season 3 will also launch across all of Call of Duty: Vanguard‘s core pillars. New content will be coming for the multiplayer and zombie modes, too, so if you play the other modes as well as Warzone, there will be a ton of new stuff to get into.

For a tease of what’s coming in the new Warzone update, you should take a look at the Season 3 trailers. Activision has released a few that detail the upcoming changes.

The key Warzone trailer to watch is the cinematic trailer, as it gives a real flavour of everything that’s coming in the Classified Arms update:

The big (emphasis on the big) addition in the new Warzone update is an epic battle between King Kong and Godzilla. Activision is keeping cagey about what exactly that will entail but you can see glimpses of it in this monster-filled trailer for Operation Monarch:

For the nitty gritty of what’s included in the Warzone update is the season 3 battle pass trailer. It gives you a look at the new cosmetics and weapons blueprints you’re going to be fighting to unlock across the new season:

It wouldn’t be a warzone update without new weapons, and Season 3 comes loaded with new gear.  Activision has revealed four new weapons will be added to the battle royale, and two of them will be available on launch day.

With the other two weapons showing up mid-season:

Caldera will be in focus this season, as Nebula bombs have been set off on the island. It’s good to see the map get the attention, as it hasn’t gotten much love since the Pacific update was released.

The biggest change is the addition of an entirely new POI, but there are also changes to existing ones on the map:

The rumors of the king of crossover events were true: the next Warzone update will sow the seeds for Operation Monarch, a major in-game event that will debut part way into season 3 on May 11.

Operation Monarch sees King Kong and Godzilla battle it out over Caldera Island, but even though they don’t arrive until next month, we’ll see signs of their coming from the moment the new season launches thanks to updates to the map.

Recent bombing has unearthed prehistoric fossils across the Warzone map, along with other signs of less than fossilized creatures.

Operation Monarch isn’t just about fighting monsters, it also brings with it unique skins, like this Kong outfit:

There are lots of new skins to unlock and buy, many of them themed after Kong and Godzilla.

Separate to the skins on sale, there are more than 25 free items and blueprints that can be unlocked over the course of Warzone season 3, such as the “Retrofashioned” Shotgun, “Regimental” Marksman Rifle, and the Legendary “Photon Phantom” Pistol.

Looking for more? Activision has finally started talking about Warzone 2