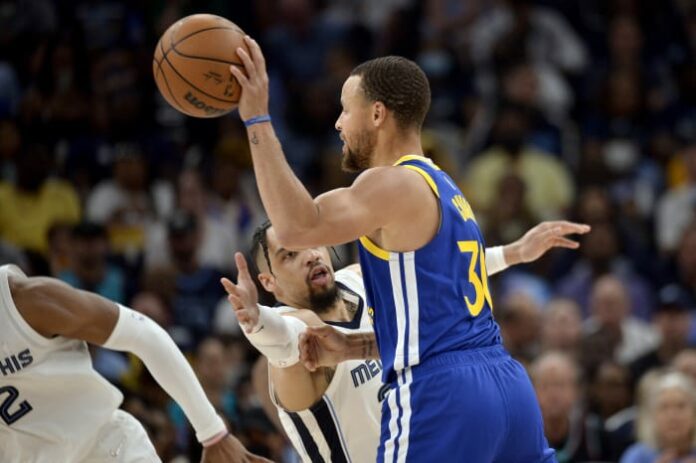 Jordan Poole led the Warriors with 31 points off the bench, hitting 5 of 10 3-pointers. Stephen Curry added 24 points, Andrew Wiggins had 17 and Thompson finished with 15.

Green was ejected for a flagrant foul just before halftime.

Thompson missed both free throws with 6.7 seconds left, then Memphis won a jump ball before taking a timeout with 3.6 seconds remaining to set up the final play. The Grizzlies ran a play similar to Ja Morant’s last-second layup to win Game 5 in the first round, but Morant’s layup went over the rim.

Morant finished with 34 points and 10 assists, and Jaren Jackson Jr. matched his season high with six 3-pointers and had a career-high 33 points as Memphis’ first pair of teammates to score at least 30 in a playoff game. D’Anthony Melton added 14, and Brandon Clarke had 12.

The Grizzlies finished their first-round series by coming back from double-digit deficits in their final three wins — the first team in NBA history to do that more than once in a postseason, let alone a series. They came in leading the NBA in the fourth with an average of 33 points and outscoring opponents by 10.3 points a game.

This time, they could only match the Warriors point for point in the period.

Memphis edged the Warriors out for the No. 2 seed in the West by tying the franchise record with 56 wins, and the Grizzlies also took three of four in their season series. Thompson only played one and Green two of those games and Curry three.

This was a rematch with role reversals from the 2015 semifinal the Warriors won as the younger team with Memphis led by experienced vets. This also was just the first time the Warriors started a conference semifinal on the road and third playoff series Golden State didn’t start at home with Steve Kerr as coach.

The Warriors mixed up their lineup, benching Poole in favor of Gary Payton II to focus on defending Morant, the Grizzlies’ All-Star point guard and the NBA’s Most Improved Player this season.

Morant opened the game with back-to-back 3s, half of what he made the entire first round against Minnesota, and he had 14 to help the Grizzlies lead 32-24 after the first quarter. It marked the first time Memphis held an opponent to fewer than 30 points this postseason.

The Grizzlies led by as much as 13 in the second quarter and were up 61-55 at halftime.

With 1:18 left in the second, Green fouled Brandon Clarke. Officials reviewed the play for several minutes with fans chanting “Throw him out!” Green finished with six points, four rebounds and five turnovers.

Curry was held to eight points in the first half, none in the second and picked up his third foul seconds after Green’s ejection.

Curry was held to eight points in the first half, none in the second. But he scored 13 and Poole had 10 in the third as the Warriors outscored Memphis 36-29 and led 91-90 after the third. Golden State was 14 of 21 shooting in the third, including 5 of 7 outside the arc.

Warriors: Curry passed Dennis Johnson for 23rd for most playoff points with 3,123. Next up is Paul Pierce with 3,180. … Kevon Looney and Poole started the second half in place of Green and Payton, who started but was limited to eight minutes by three early fouls. … The Warriors also started on the road against Houston in 2018 and Toronto in 2019. … They won a road game in a series extending their NBA record to a 25th consecutive series.

Grizzlies: Steven Adams, who led the NBA in offensive rebounds per game during the regular season, missed a second straight game in the health and safety protocols. Ziaire Williams missed his second game with a sore right knee.