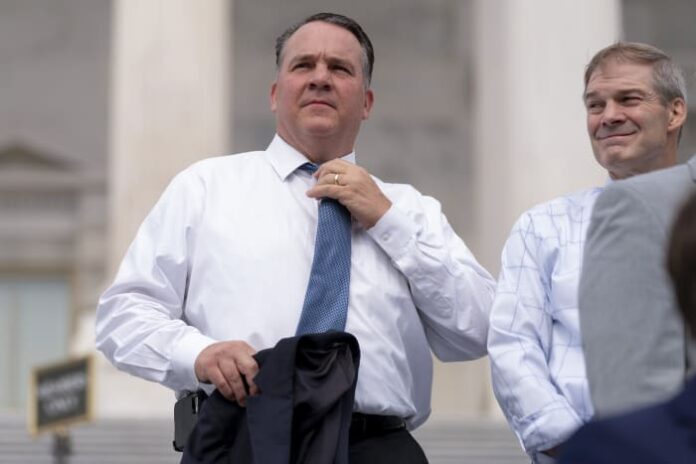 CHARLESTON, W.Va. – One contender thinks West Virginia voters will see the value of federal spending on badly needed infrastructure in one of the nation’s poorest regions. The other is betting that loyalty to former President Donald Trump will matter more.

The May 10 primary in West Virginia’s 2nd Congressional District between Republican Reps. Alex Mooney and David McKinley will be a barometer of Trump’s clout in a state that wholeheartedly embraced him in two presidential elections.

The two incumbents were pitted against each other after population losses cost West Virginia a U.S. House seat. The divergent paths they’ve chosen as congressmen could give Republican candidates nationally an early sense of what resonates with hardcore conservative voters in 2022.

The contest comes during an intensifying stretch of the midterm election season as Trump aims to solidify his influence over the GOP. His preferred candidate in this week’s Ohio Republican primary, JD Vance, easily dispatched other rivals, but potentially tougher tests for the former president lie ahead this month in Pennsylvania, North Carolina and Georgia.

Enthusiasm for Trump remains high in West Virginia, where he prevailed in every single county in 2016 and 2020, winning more than two-thirds of the state’s voters. But West Virginians are also desperate to see upgrades in a state that consistently ranks among the worst in the nation for infrastructure. The state’s rugged landscape is rife with failing bridges and crumbling roads, and thousands of its citizens live without access to safe drinking water or internet.

Trump has made his position clear, endorsing Mooney on the day President Joe Biden signed the infrastructure bill into law. He’s repeatedly condemned McKinley and 12 other House Republicans for voting with the Democrats for Biden’s $1.2 trillion infrastructure law, saying, “Republicans who voted for Democrat longevity should be ashamed of themselves.”

Mooney, a 50-year-old former Maryland state senator who moved to West Virginia to run for Congress in 2014 and is West Virginia’s first Hispanic congressman, has doubled down on Trump’s attacks. He called McKinley a RINO, or “Republican in Name Only,” and a sellout who betrayed his constituents. But the 75-year-old McKinley, a seventh-generation West Virginian and a civil engineer by trade, says the state’s infrastructure problems are too severe for anyone to be “playing party politics.”

“There’s no question that was the right vote,” he said, noting the state’s “D” infrastructure grade from the American Society of Civil Engineers. “West Virginia was rated last. Any commonsense, reasonable person would say, ‘You got a problem, fix it.’ I think it would have been a betrayal to do otherwise.”

In July, the municipal water system was placed under an administrative order by the U.S. Environmental Protection Agency after three children were diagnosed with high lead blood levels. A subsequent study found that 4,000 customers have lead service lines. Replacing them would cost an estimated $52 million or more — a large burden on any small city.

Howe said McKinley worked with city officials to provide residents with bottled water and filters and complete an engineering study on replacing the lines. The congressman has traveled to Clarksburg repeatedly to tour the water plant and strategize about how to apply for infrastructure money.

Howe said he likes both congressmen, but given the circumstances, Mooney’s attacks on McKinley for his infrastructure vote helped make the choice clear.

“It’s hard to defend that,” he said. “If the government can do one thing right, it’s reinvest in infrastructure.”

Still, many of the infrastructure improvements that are expected to take place over the next few years won’t be visible to West Virginians right away. Meanwhile, Trump’s popularity in the state remains palpable.

“If you drive through West Virginia today, you’d think the (2020) election is still going on,” Mooney said in an interview. “There’s Trump flags everywhere. Trump signs — anti-Biden signs. It means a lot to voters.”

Voter Ron Howell, a manager for a lumber company from Buckhannon, said his decision to support Mooney is “50% Trump” and 50% McKinley’s decision to vote with Democrats.

“He supported President Donald Trump, whom I voted for and would again in a heartbeat,” he said. “I feel like McKinley is a RINO and supports much of the left’s agenda, and I don’t want that for my state.”

During their time representing West Virginia in Congress during Trump’s last two years of presidency, Mooney and McKinley voted together 87% of the time. But Mooney says there’s a consistent pattern of McKinley voting with Democrats on big votes, including his support for the creation of a commission to investigate the Jan. 6 insurrection at the U.S. Capitol.

In Harrison County, where Clarksburg is, 20-year-old Drew Harbert said he thinks that will lose McKinley more voters than supporting infrastructure.

“I don’t think people take it very kindly that he voted for that,” said Harbert, a Fairmont State University student and president of the Harrison County Young Republicans. “I think that will definitely hurt McKinley probably more than anything else that he’s done.”

Harbert said he knows infrastructure repairs are needed in the state, but said he has serious concerns about the rising national debt and believes it was irresponsible for McKinley to vote for a bill with such a big price tag.

Harbert said Trump’s endorsement bolstered his decision to back Mooney, but it was far from the only reason. He wanted a candidate who will defend gun owners’ rights. McKinley has supported red-flag laws, which permit law enforcement or family members to petition a court to remove firearms from someone who presents a possible danger to themselves or others.

McKinley, who says he voted with Trump over 90% of the time when he was in office, said he believes Mooney has misled voters about his vote on the infrastructure bill. He cited a Mooney campaign ad that attacks him for “backing Biden for a trillion-dollar spending spree,” but mentions infrastructure only in printed text.

Howell, the lumber company manager, said he thought McKinley voted for Biden’s Build Back Better plan — a proposal McKinley vehemently opposed — and initially cited that vote as a reason for supporting Mooney. After doing more research on McKinley’s voting record, he said the congressman voted the way he would have most of the time. But he said he couldn’t forgive McKinley for his Jan. 6 and infrastructure votes.

“I wish we were in different times and I could be nonpartisan, but the Democrats have made that impossible,” he said.

Nate Orders, a bridge-building contractor who is president of the Contractors Association of West Virginia, said there’s a lot of hypocrisy in criticisms of the infrastructure bill and the Republicans who voted for it. Trump supporters were on board with infrastructure spending when the former president introduced his $2 trillion proposal, which Democrats blocked.

“If Alex Mooney wins, it’s another sign that our democracy continues down the road to dysfunction, where all that matters is party politics,” he said. “If David McKinley wins, it shows me a little bit of hope that even though we can agree or disagree on some big issues, we can also agree on the things that really make a difference to Americans.”