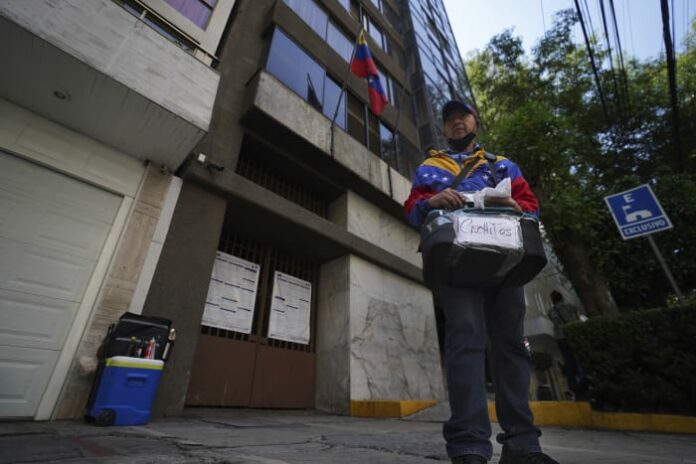 MEXICO CITY – The eyes of Fabiana Marquez brightened after she took the first bite of a savory, crescent-like bread stuffed with ham and cheese. Memories flooded her mind. The Venezuelan immigrant hadn’t eaten a “cachito” in almost five years until she stumbled across a vendor outside her country’s embassy in Mexico.

Marquez left her South American homeland in 2017 amid a social, political and humanitarian crisis that has now driven more than 6 million to migrate across the continent and beyond. She has worked as a nanny, housekeeper, waitress and at other jobs to make ends meet, mostly in outlying parts of Mexico. In the process, she severed deep roots to her country, including the food close to her heart.

“It gave me great pleasure because I hadn’t eaten Venezuelan food in many years,” Marquez said standing next the vendor, who had plastic containers stuffed with a variety of Venezuelan food along a street in a tony Mexico City neighborhood. “Since I arrived in Mexico, I had eaten just a few arepas, but I had completely disconnected from what Venezuelan food is.”

But if she feels cut off from the cuisine of her homeland, many Mexicans have come to discover it. The Venezuelan diaspora has brought shops selling arepas — stuffed corn cakes common to that country and neighboring Colombia. They also are increasingly filling their fellow immigrants’ yearning for cachitos, empanadas and pastelitos while earning much-needed money.

Many of the shops are concentrated in the trendy Roma neighborhood, but they’ve also emerged in middle- and working-class districts, as well as cities such as Cancun and Acapulco, Puebla and Aguascalientes, Metepec and Culiacan.

Nelson Banda used to own a clothing factory about 80 miles west of Caracas, Venezuela’s capital, and sold school uniforms across the country. But as soaring production costs due to inflation ate up any profits, he closed shop a year and a half ago, sold off equipment and joined relatives in Mexico City.

Banda sells about 80 empanadas and 40 cachitos a day outside the Venezuelan Embassy. Clad in a windbreaker with the colors of his country’s flag, he also sells the non-alcoholic malt drink that is a staple at the Venezuelan breakfast table.

Most of Banda’s customers are people like Marquez who must visit the embassy, but he also has regulars.

“They feel the warmth of Venezuela when they see these (foods),” Banda said. “Here, there is a large Venezuelan community, and well, among the community, everyone tries to survive; everyone sets up their own business in their own way and sells what they can.”

International migration agencies estimate Latin American and Caribbean countries have received over 80% of the Venezuelans who left their country in recent years. Colombia and Peru have received the most, but until recently, Mexico also was a popular option because it demanded no visa from Venezuelans and is close to the U.S., which many hoped to reach one day.

Mexico, however, began requiring visas of Venezuelans in January after imposing similar restrictions on Brazilians and Ecuadorians in response to large numbers of migrants headed to the U.S. border.

In December, U.S. officials stopped Venezuelans nearly 25,000 times on the border, more than double September’s count and up from only about 200 times the same period a year earlier.

“Every Venezuelan who leaves … carries in his symbolic luggage his flavors and carries his meals and even carries survival strategies,” said Ocarina Castillo, a Venezuelan anthropologist who has studied the country’s gastronomy. She noted that for many Venezuelan migrants, “the first thing they look for to survive is the possibility of selling arepas, golfeados, empanadas, the possibility even of selling their regional cuisines.”

Recent immigrants face increasing competition for jobs in host countries, in part because of the pandemic. Many also arrive with fewer resources and are in immediate need of food, shelter and legal documentation, according to the U.N. High Commissioner for Refugees.

Like many immigrants before them, Venezuelans are taking their food to across the world — from the streets of Chile to Japan and South Korea.

Arepas have also entered the world of fusion cuisine. A cookbook recently published by the U.N. High Commissioner for Refugees includes a recipe for Dominican-Venezuelan arepas stuffed with black beans, pork rinds and cheese. They were created by a Venezuelan man who resettled in 2016 in the Dominican Republic and became a chef.

“Gastronomy, when it travels, has two roles,” Castillo said. “On the one hand, it’s that wonderful thing that makes you feel good, that rings a bell and makes you cry, makes you feel enormously emotional and reunites you with your childhood. But on the other hand, it is also a bridge to the culture that is welcoming you.”

Raybeli Castellano graduated from the country’s music conservatory and is a professional violinist. But by 2016, as Venezuela came undone, she considered getting training to become a flight attendant or baker or bartender and taking those skills to another country.

After she finished baking lessons, she settled in Mexico City, where she first worked as a restaurant baker, soap opera extra, wedding violinist and eventually as an office assistant. Losing her office job during the pandemic pushed Castellano, 26, to start a business making cachitos, pan de jamon and other baked goods from home. She delivers them to customers who found her on social media or through word of mouth.

She sold 100 cachitos the first week.

Castellano now counts Mexicans, too, as her customers. “So my entrepreneurship was born out of necessity, (but) I also knew how to do it, and I said ‘well, I no longer want to return to an office.'”