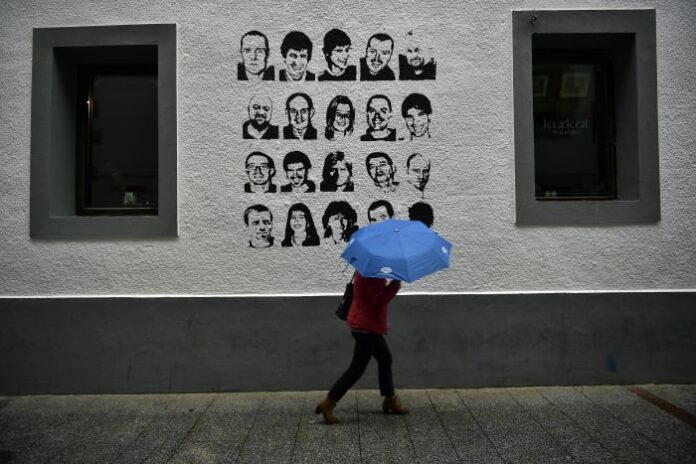 BERLIN – The United States is poised to remove five extremist groups, all believed to be defunct, from its list of foreign terrorist organizations, including several that once posed significant threats, killing hundreds if not thousands of people across Asia, Europe and the Middle East.

Although the groups are inactive, the decision is politically sensitive for the Biden administration and the countries in which the organizations operated, and could draw criticism from victims and their families still dealing with the losses of loved ones.

The organizations include the Basque separatist group ETA , the Japanese cult Aum Shinrikyo, the radical Jewish group Kahane Kach and two Islamic groups that have been active in Israel, the Palestinian territories and Egypt.

The U.S. State Department notified Congress on Friday of the moves, which come at the same time as an increasingly divisive but unrelated debate in Washington and elsewhere about whether Iran’s paramilitary Revolutionary Guard should or can be legally removed from the U.S. list as part of efforts to salvage the languishing Iran nuclear deal.

That designation, which was imposed by the Trump administration, was not mentioned in Friday’s notifications.

In separate notices to lawmakers, the State Department said the terrorism designations for the five groups will be formally removed when the determinations are published in the Federal Register, which is expected this coming week.

Copies of the notifications, all of which were signed by U.S. Secretary of State Antony Blinken on Wednesday, were obtained by The Associated Press.

The general reason for the removals is identical in each of the cases: Blinken asserting that they were based on an administrative review of the designations, which by law is required every five years.

The reviews take into account whether designated groups are still active, whether they have committed terrorist acts within the previous five years and whether removal from or retention of the list would be in U.S. national security interests. Under the law that created the list, the secretary of state can remove groups that he or she deems no longer to fit the criteria.

“Based on a review of the Administrative Record assembled in this matter and in consultation with the Attorney General and the Secretary of the Treasury, I determine that the circumstances that were the basis for the designation … have changed in such a manner to warrant revocation of the designation,” Blinken wrote in each notice.

Removing the groups from the list has the immediate effect of rescinding a range of sanctions that the designations had entailed. Those include asset freezes and travel bans as well as a prohibition on any Americans providing the groups or their members with any material support. In the past the material support provision has been broadly defined to encompass money or in-kind assistance, in some cases even medical care.

All but one of the five groups was first designated a foreign terrorist organization in 1997 and have remained on the list for the past 25 years.

U.S. officials familiar with the matter said the decisions were made only after consulting lawmakers several months ago about whether the latest five-year reviews should proceed. Before now, only 15 groups have been removed from the list.

The specific reasons for each the removals are included only in classified sections that accompanied the notifications, which are not classified on their own. These sections are labeled “SECRET/NOFORN,” which means their contents can only be shared among U.S. officials with proper clearances and not with foreign governments.

The groups to be removed are:

—Aum Shinrikyo (AUM), the Japanese “Supreme Truth” cult that carried out the deadly sarin gas attack on the Tokyo subway in 1995 that killed 13 people and sickened hundreds more. The group has been considered largely defunct since the executions of its top echelons, including leader Shoko Asahara, in 2018. It was designated a foreign terrorist organization in 1997.

— Basque Fatherland and Liberty, or ETA, which ran a separatist campaign of bombings and assassinations in northern Spain and elsewhere for decades that killed more than 800 people and wounded thousands more, until declaring a cease-fire in 2010 and disbanding after the arrests and trials of its last leaders in 2018. It was designated a foreign terrorist organization in 1997.

—Kahane Chai, or Kach. The radical Orthodox Jewish group was founded by ultranationalist Israeli Rabbi Meir Kahane in 1971. He led the group until his assassination in 1990. Members of the group have killed, attacked or otherwise threatened or harassed Arabs, Palestinians and Israeli government officials, but the organization has been dormant since 2005. The group was first designated in 1997.

—The Mujahidin Shura Council in the Environs of Jerusalem, an umbrella group of several jihadist organizations based in Gaza that has claimed responsibility for numerous rocket and other attacks on Israel since its founding in 2012. The council was first designated in 2014.

—Gama’a al-Islamiyya, or Islamic Group–IG, an Egyptian Sunni Islamist movement that fought to topple Egypt’s government during the 1990s. It conducted hundreds of deadly attacks against the police and security forces as well as tourists. The group was first designated in 1997.