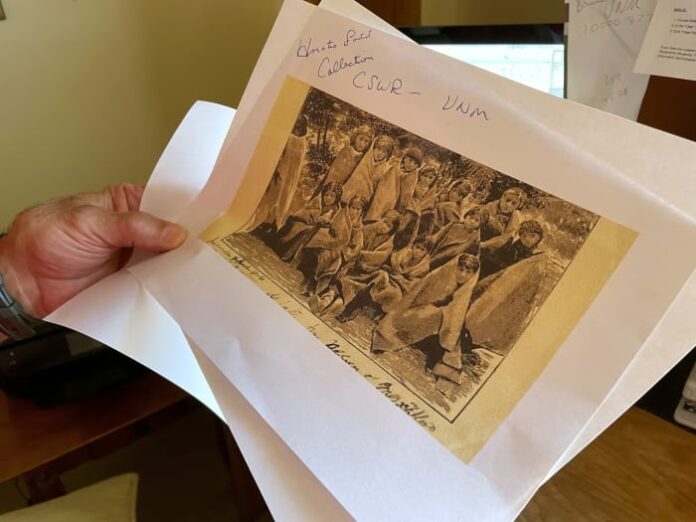 A new Interior Department report on the legacy of boarding schools for Native Americans underscores how closely the U.S. government collaborated with churches to Christianize them as part of a project to sever them from their culture, their identities and ultimately their land.

The role of churches forms a secondary part of the Federal Indian Boarding School Initiative Investigative Report, released Wednesday after a yearlong review sparked by the 2021 discoveries of hundreds of potential graves at former residential schools in Canada. Most of it focuses on the government’s responsibility for its own officials’ actions and policies.

But it details how the government provided funding and other support to religious boarding schools for Native children in the 19th and early 20th centuries to an extent that normally would have been prohibited under rules on separation between church and state. Churches had clout with the government as well, it adds, and were able to recommend people for appointments to federal positions on Native affairs.

While this church-state collaboration is well known to specialists in the field and was the subject of federal reports in past generations, the latest one brings it to a wide audience at a time when many Americans are only beginning to learn about the boarding schools.

The Interior Department report, quoting a 1969 Senate investigation, acknowledges that “federal policy toward the Indian was based on the desire to dispossess him of his land. Education policy was a function of our land policy.”

A core part of that was training Native Americans in vocations that were less land-intensive — though often ill-suited to available jobs — in addition to breaking down tribal ties.

Christian conversion was also key, the report says, citing an 1886 Commissioner for Indian Affairs document that disparaged Native spiritual traditions and said the government should provide “encouragement and cooperation” to missionaries.

“The government aid furnished enables them to sustain their missions, and renders it possible … to lead these people, whose paganism has been the chief obstacle to their civilization into the light of Christianity,” the commissioner wrote at the time.

This week’s report also says the government funded the schools with money held in trust for tribes as compensation for land they ceded. A 1908 Supreme Court ruling held that “the prohibition on the Federal Government to spend funds on religious schools did not apply to Indian treaty funds,” it notes.

And it says, citing the 1969 Senate investigation, that the U.S. military “was frequently called in to reinforce the missionaries’ orders” in the 19th century.

The report identifies 408 boarding schools for Indigenous children in 37 states and former territories that were either run or supported by the government between 1819 and 1969. While it doesn’t say how many were church-run, an earlier report by the National Native American Boarding School Healing Coalition found that more than 150 were, about half each by Catholic and Protestant groups.

At a congressional hearing Thursday on a bill that would authorize a truth-and-healing commission to investigate the boarding schools, modeled on a similar one in Canada, witness Matthew War Bonnet testified about his childhood experience at the St. Francis Boarding School in South Dakota. Priests who ran the facility sought to alienate him from his parents and culture, and at times subjected him to sadistic abuse.

“The boarding schools were sanctioned by the United States Government,” said War Bonnet, 76, a Sicangu Lakota from the Rosebud Sioux Reservation. “The government gave the churches our lands to Christianize us, modernize us and civilize us. But the churches treated us wrong. … The government and the churches need to be held accountable.”

The Rev. Bradley Hauff, the Episcopal Church’s missioner for Indigenous ministries, who is Lakota and a member of the Oglala Sioux Tribe, said faith groups must confront their history of collaboration on the schools.

“As much as we in the church might not want to acknowledge that, it is the truth, and we have to acknowledge and reckon with it. We did work hand in hand with the government in the assimilation process,” he said. “Most if not all the Christian denominations that had a presence in America in the late 19th century operated at least one Indigenous boarding school.”

At its General Convention in July, the Episcopal Church plans to vote on probing its role with the schools and acknowledging its responsibility for causing trauma in generations of Native Americans.

Maka Black Elk, executive director of truth and healing at the Red Cloud Indian School, founded in 1888 by Jesuits in Pine Ridge, South Dakota, agreed that faith groups must reckon with their past. Lakota staffing, language and ritual are central to the modern Red Cloud school, which serves Christians as well as followers of Native spiritual traditions.

“While today we recognize there are many Native people who identify as Christian … and value that part of their identity, we have to engage deeply with that history,” he said.

Any evangelism must be “rooted in people’s agency and (be) nonviolent,” added Black Elk, who is Oglala Lakota. “That is a big part of our discussion today. That’s a broader question for the greater Catholic church, not just us.”

In April, Pope Francis apologized at the Vatican to Indigenous delegations from Canada “for the deplorable conduct of those members of the Catholic Church” in operating the schools, where many children were abused and died from disease and other causes. Francis plans to apologize again on Canadian soil in July.

The Friends Committee on National Legislation, a lobby affiliated with the Quaker movement, which operated multiple boarding schools, said in a statement that this week’s Interior report should spur congressional approval of the truth and healing commission.

“Further, we call on the faith community at large to share records and accounts of their administration of these schools,” the committee said. “Only through complete honesty and transparency can we begin moving towards a more just future.”