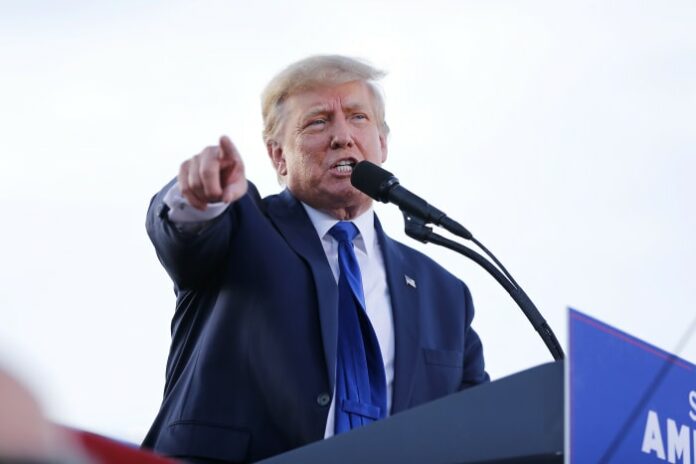 NEW YORK – Fresh off a victory in the first real test of his power as GOP kingmaker, former President Donald Trump enters the next stretch of the midterm campaign emboldened — and facing new risks.

“Every single candidate that I endorsed won their primaries on Tuesday,” Trump crowed at a Friday night rally in Pennsylvania, where he held up Vance as a trophy of his achievement. “Tuesday’s primary results are just the latest proof that we have transformed the face of the Republican Party. Thank goodness.”

With Trump trying to assert his dominance over the party ahead of another potential presidential run, some allies say the Ohio victory could encourage him to step up his involvement in other bitter primary fights from Arizona to Missouri, where a former governor and current U.S. Senate candidate, Eric Greitens, is facing allegations of abuse. But there’s also caution that the coming phase of the campaign, which continues on Tuesday with a tight GOP race for governor in Nebraska, could be more complicated for Trump.

“Round one to Trump, but I think it gets an awful lot harder from here,” said Dan Eberhart, a GOP donor who spent time last week at Trump’s Mar-a-Lago club. “I think it’s going to encourage him to get even more involved and it’s also got to worry him,” Eberhart said, pointing to questions about what it will be like “the day after Pennsylvania or the day after Georgia?”

In some respects, Trump’s allies acknowledge, Ohio was a uniquely favorable state for him.

Trump carried Ohio by more than 8 percentage points in the 2016 and 2020 elections. The candidates running to fill the seat being vacated by retiring Sen. Rob Portman desperately courted his endorsement while trying to paint themselves to voters as the Trumpiest of the bunch. The field was crowded, meaning that even a small bump would have been enough to make a difference. And Trump’s endorsement addressed what had been Vance’s biggest vulnerability in the race: his past criticism of Trump.

“It clarified things, consolidated the vote and helped JD overcome a trust deficit with primary voters,” said Luke Thompson, who ran Vance’s super PAC. “That happens because Trump’s endorsement told conservative voters: You can trust this guy because I do.”

Yet even in that environment, there were warning signs for Trump. More than two-thirds of Republican voters who cast ballots in the race voted for Vance’s rivals. And nearly a quarter chose Matt Dolan, the only candidate who did not seek Trump’s nod.

For now, however, Trump is riding high. And allies say the former president may be willing to take even greater risks now that he has notched a major victory.

That could mean an endorsement soon in Arizona’s competitive Senate primary, where Republicans will choose a candidate in August to take on Democratic Sen. Mark Kelly, a top target for Republicans.

Trump was already seen as favoring Blake Masters, a young conservative, who, like Vance, has the backing of billionaire and PayPal cofounder Peter Thiel, but lacks Vance’s celebrity appeal. Masters is running against Attorney General Mark Brnovich and businessman Jim Lamon. Trump has repeatedly railed against Brnovich, accusing him of not fighting hard enough to overturn the will of voters in the 2020 election.

Matt Schlapp, chair of the American Conservative Union, said he thinks Trump took a risk in endorsing Vance. “He took somebody who was struggling in the polls but has a great personal biography and celebrity status and helped push him over the goal line.” Schlapp added: “I think he’s prone to take risks both in his business career and in politics and so he’s going be prone to want to act.”

But, Schlapp said, “there’s an upside and a downside to acting. If you endorse someone and they don’t win, it can be perceived that your endorsement doesn’t matter as much.” Schlapp is supporting Lamon.

The rest of the month’s calendar will be more challenging for Trump, especially in races with incumbents.

On Tuesday, Republicans will vote in Nebraska, where Trump had endorsed Charles Herbster, who was seen as a strong front-runner through much of the race but is now fighting accusations that he groped at least eight young women at public events. Nearly all of Nebraska’s GOP establishment leaders have lined up behind businessman Jim Pillen.

Meanwhile, in West Virginia, a race in the 2nd Congressional District between Republican Reps. Alex Mooney and David McKinley will serve as another barometer of Trump’s clout in a state he won twice by large margins. Trump endorsed Mooney the day President Joe Biden signed the bipartisan infrastructure bill into law last year. He has repeatedly condemned McKinley and 12 other House Republicans for voting with Democrats, though the bill provides $6 billion in infrastructure spending for West Virginia.

Next week, Trump’s pick for an open Senate seat in North Carolina, Rep. Ted Budd, is well positioned against former Gov. Pat McCrory and former Rep. Mark Walker after a rocky start. But in Pennsylvania, celebrity TV doctor Mehmet Oz is locked in a tight race with ex-hedge fund CEO David McCormick and conservative activist Kathy Barnette, according to the most recent Franklin and Marshall College poll, despite Trump’s late-stage endorsement.

Trump’s decision to back Oz earned the doctor a wave of media attention and a rally Friday night, where Trump trumpeted the impact of his Vance endorsement (“He was like a rocket ship,” Trump said, with sound effects), praised Oz (“I’ve known him a long time. His show is great. He’s on that screen. He’s in the bedrooms of all those women”) and eviscerated McCormick as a “liberal Wall Street Republican” who is “absolutely the candidate of special interests and globalists and the Washington establishment.”

But Oz has not seen the same kind of poll bounce that Vance enjoyed in the days after Trump waded in. And that resistance was on display in the rain and mud on Friday, with some in the crowd booing at the mention of Oz’s name before Trump’s arrival and others standing and turning their backs to him when he walked on stage, according to video of the event.

Vance, who attended the rally with Trump, made the case to voters that even if they didn’t support Oz, the race was a referendum on Trump himself.

The month will close with contests in Alabama — where Trump dropped Rep. Mo Brooks when it became clear the candidate was struggling in his Senate race — and in Georgia, where the governor’s race poses Trump’s biggest challenge. For now, he appears poised for a major defeat, with former Sen. David Perdue trailing incumbent Republican Gov. Brian Kemp, arguably Trump’s biggest target of the election calendar because he rejected Trump’s efforts to try to overturn the results of the 2020 election.

Yet even if his candidates lose their primaries, or ultimately their general elections, Trumpism has already won. Hundreds of candidates have run in the former president’s image and on his “America First” policy — with some running ads claiming his support even when he failed to endorse them — laying bare how dramatically Trump has transformed the party as he mulls another run for president in 2024.

And while it appeared at one point as if the leaders of the party might reject him, Trump will again headline a major party fundraiser on Monday, this time speaking at a National Republican Congressional Committee dinner in Dallas.