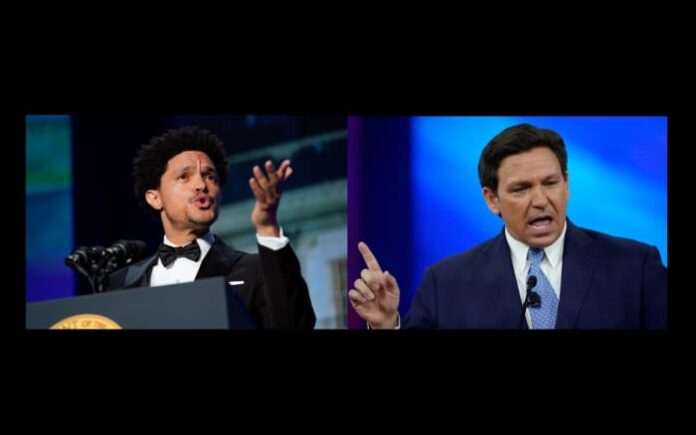 Noah used the opportunity to jab Florida Gov. Ron DeSantis at the Washington D.C. event hosted by the White House Correspondents’ Association (WHCA), an organization of journalists who cover the White House.

“One of my favorites, Ron DeSantis is here. Oh man, I’m actually surprised that he found the time,” Noah said. “You know he has been so busy trying to outmaneuver [former President Donald] Trump for 2024. I see you, Ron. I see you, player.”

DeSantis has dismissed any talk of a presidential run in 2024, though it’s widely believed he will eventually throw his hat into the ring and challenge Trump, who has also been unclear about his 2024 intentions.

“Yeah, I’ve seen what you’ve been doing, blaming Trump for the lockdowns, distancing yourself from the vaccines that Trump created with his own two hands,” Noah said before launching into a Trump impersonation.

Noah then said DeSantis is being coy by not revealing if he has received a COVID-19 booster shot.

“Trump was the original Terminator, DeSantis is like the T-1000,” Noah said. “You’re smarter than him, you’re slicker than him, you can walk down ramps. Because you see, no, Trump said he won the election, but everyone was just able to look at the numbers and see he was wrong. That’s why Ron DeSantis is one step ahead, first you ban the math textbooks, then nobody knows how to count the votes. Boom, my man!”

Trevor Noah on FL Gov. DeSantis eyeing a 2024 presidential run: ‘Ron DeSantis is one step ahead [of Trump]. First you ban the math textbooks, then nobody knows how to count the votes’ #WHCD pic.twitter.com/HZ6iyXybmG

Noah was referencing the controversy over math textbooks from last month.

The state rejected 54 math textbooks for prohibited topics and then released examples that it says back up its rejection of the textbooks. The Florida Department of Education released examples of what it calls critical race theory and an example of social-emotional learning that Gov. Ron DeSantis said was found in unpublished books. FDOE eventually reinstated some of the books.

Although Noah alluded to DeSantis being in the audience, and a photo of a program shared on Twitter listed him as an attendee, a spokeswoman for DeSantis said the governor was not there and never planned to be there.

“Why are people saying Governor DeSantis is at the White House Correspondents Dinner!? Because DC Democrats and media (but I repeat myself) can’t stop talking about him even during their nerd prom?” DeSantis spokeswoman Christina Pushaw tweeted on Sunday. “This is wishful thinking/obsession.”

He was not there and never planned to be there. This is wishful thinking / obsession. https://t.co/bktqB93FYq