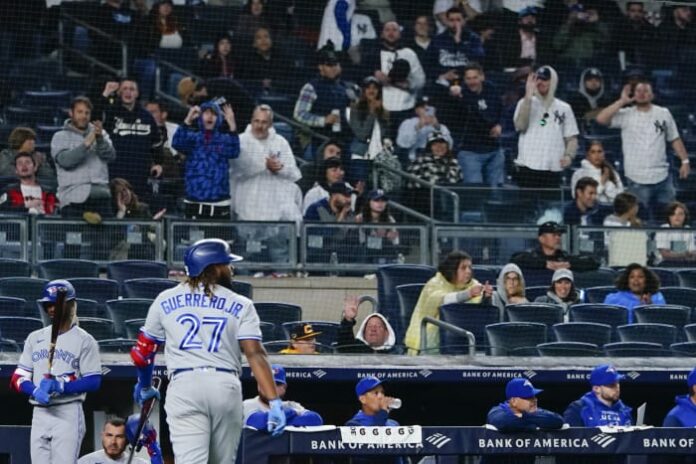 Clay Holmes (2-0) pitched 1 1-3 innings for the win and Chad Green worked a perfect ninth for his first save in three chances.

Torres opened the scoring with a two-out, two-run drive off Ross Stripling in the fourth, his third homer of the season.

The Yankees won for the 12th time in 13 games and improved their MLB-leading record to 17-8.

The Blue Jays dropped to 9-3 in one-run games.

New York put runners at the corners with one out in the third but Stripling struck out Aaron Judge and got Anthony Rizzo to fly out. Judge had homered in his past three games, and had hit five home runs in his previous five games.

Yankees left-hander Jordan Montgomery faced the minimum through three innings but the Blue Jays tied it in the bottom of the fourth. George Springer singled and scored on Bo Bichette’s RBI double. Bichette advanced on a fly ball and later scored on Matt Chapman’s two-out single.

Chapman struck out against Jonathan Loáisiga to end the sixth, stranding Bichette at third.

Toronto’s Alejandro Kirk drew a leadoff walk against reliever Miguel Castro in the seventh and Tyler Heineman hit a two-out double, but Holmes came on and got Springer to ground out.

Vladimir Guerrero Jr. and Lourdes Gurriel Jr. hit back-to-back singles off Holmes in the eighth but Chapman grounded into an inning-ending double play, Toronto’s third of the game.

Montgomery gave up two runs and six hits in five-plus innings. He walked none and struck out five.

Stripling allowed two runs and five hits in four innings. He walked none and struck out three.

All members of the Yankees’ active roster were permitted to cross the border into Canada, indicating they are vaccinated against COVID-19. Canada’s government requires a person must have received a second vaccine dose — or one dose of Johnson & Johnson — at least 14 days prior to entry.

Stanton leaped to the top of the right-field wall to haul in Chapman’s deep drive in the second.

Blue Jays third base coach Luis Rivera was away from the team because he is a close contact of a COVID-19 infection. First base coach Mark Budzinksi coached third and field coordinator Gil Kim went to first.

Yankees: OF Joey Gallo (tight left groin) was out of the lineup for the second straight day. Manager Aaron Boone said Gallo was available to pinch-hit. Gallo left Saturday’s game at Kansas City in the fifth inning. … INF Miguel Anudujar joined the Yankees as a taxi squad player.