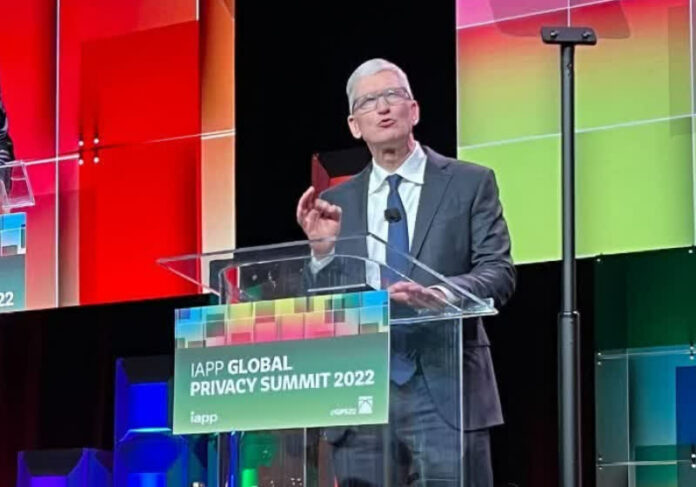 Why it matters: Apple has repeatedly stated its case against sideloading in response to lawsuits and legislation over the last few years. CEO Tim Cook used his keynote at the 2022 International Association of Privacy Professionals (IAPP) summit this week to do so again, framing the subject around the summit’s theme of user privacy.

During his Tuesday IAPP keynote speech (watch above) in Washington DC, Tim Cook said sideloading on iOS devices would allow advertisers and malicious actors circumvent Apple’s app store regulations in order to grab and sell users’ data. The Cupertino company built part of its products’ reputation on the measures it takes to protect that data.

Apple likes to defend its walled software garden stance for iOS and iPadOS devices by raising the fear of malicious apps hosted on websites, and Cook’s speech mentioned this. He also theorized that companies might abandon Apple’s App Store to sidestep its restrictions and more easily exploit user data.

Data harvesting was the subject of last weekend’s episode of Last Week Tonight. Host John Oliver demonstrated its ease by revealing the show’s staff had collected data on thousands of people around the US capitol who fit the demographic of politicians.

Tim Cook’s speech mentioned attempts by the US and other governments to force Apple to allow sideloading to broaden competition. Late in March, the European Union cleared a major hurdle in legislation that would do just that to big platform holders like Apple.

Apple’s longtime legal opponent, Epic Games, has been a fierce champion of sideloading, accusing Apple of monopolistic practices. Some countries like the Netherlands and South Korea have already passed laws chipping away at Apple’s app store regulations.