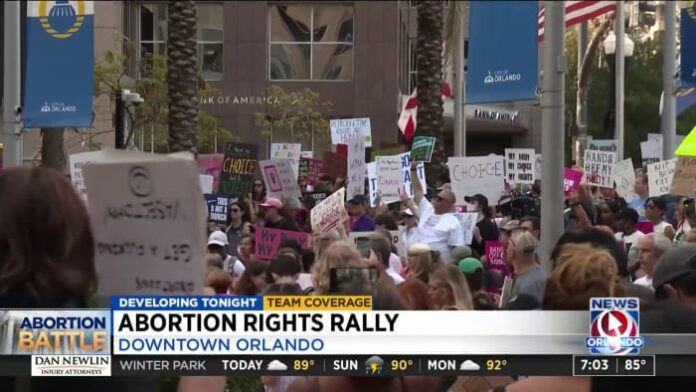 Thousands of protestors descended on city hall in hopes of having their voices heard in opposition to a draft leak from the nation’s highest court.

“We’re doing this so you know how to get involved,” yelled organizers as people sat and watched a rally on the steps of Orlando’s downtown city hall Saturday.

This demonstration was among thousands nationwide as part of a “Bans off our bodies” rally.

All this coming after an opinion draft was leaked from the United States Supreme Court suggesting they would overturn the historic case of Roe. V. Wade, which legalized abortion.

“This is really an attack on minority groups and on their growth,” said Italia Rico with QLatinX, “Abortion rights is a healthcare solution, it’s a healthcare option.”

Pro-choice protestors argue a reversal of Roe vs. Wade will set America back decades and lead to stricter legislation on items outside of abortion from immigration to LGBTQ+ rights.

“It will affect low income, the poor, people of color, because they don’t have the resources of wealthier people,” said Debbie Deland.

While many among the crowd disapproved of the draft opinion, others say the draft is a step in the right direction.

“We are here because we believe in justice and we believe that it is just for these babies lives need to be protected,” said Abby Doe.

Pro-life protestors argued this opinion will protect all life, no matter the stage.

Organizers say no matter the outcome, they will continue to fight.

“We may lose, but we keep coming back and fighting until we get our right back,” DeLand said.

The Supreme Court has said the draft leak was just an opinion and that decision is not final.