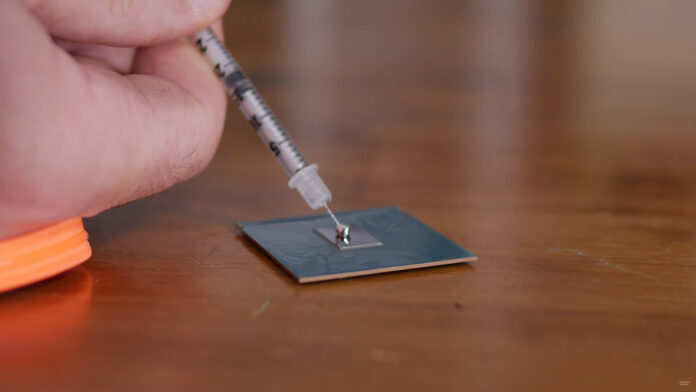 The big picture: Rockit’s IHS replacement kit aims to improve the thermal transfer capability of Intel’s 12th gen processors. Combined with liquid metal between the heat spreader and the CPU die, they are advertising an up to 15-degree drop in temperatures. Linus Sebastian puts this claim to the test in his latest video.

Keeping Intel’s flagship Core i9-12900KS from thermal throttling isn’t an easy task, as seen in our review. That’s why YouTube tech channel LinusTechTips set out to delid the $740 processor.

For the uninitiated, delidding a CPU involves removing the IHS from the top of the processor and replacing the thermal interface material underneath. While this is nothing new, it has become a lot harder to do since Intel started soldering the heatspreader to the CPU die a few generations ago.

Linus and his crew start by using a heat gun to soften up the solder before removing the IHS with the help of a delid tool. They follow this up by scrubbing the glue off the interposer and polishing the CPU die until there’s no more solder left.

Next up, they carefully apply liquid metal to the die and underneath the new IHS. The Rockit IHS features a 9.5% higher surface area in comparison to the stock one and is also machined to be as flat as possible. Lastly, they apply some new glue, reassemble the CPU, and stick it into a relidding tool.

The test setup consisted of a custom water cooling loop for the CPU and an RTX 3090 Ti. In Prime95 and Blender, the mod lowered temperatures by about 9 degrees while allowing the processor to boost for longer. Average FPS in Shadow of the Tomb Raider and Forza Horizon 5 remained identical, but the CPU scores went up by around 3%.

Be sure to check out the video for the entire walkthrough. While this is a relatively cheap way to improve performance on a thermally-constrained CPU, it should be noted that delidding is inherently risky and will void your warranty.