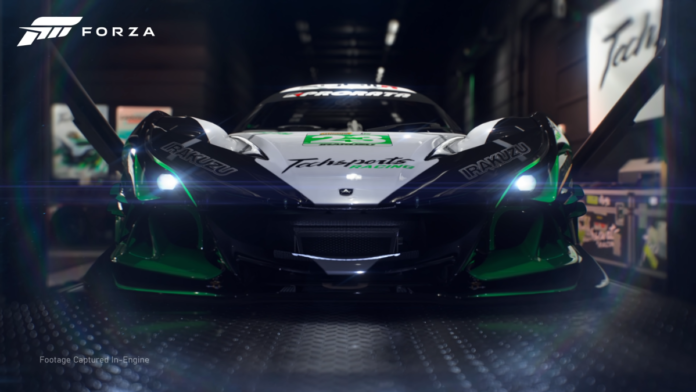 It’s been two years since Forza Motorsport was announced by Microsoft, but we’ve seen almost nothing since. Initially believed to be console exclusive for Xbox Series X and S alongside a PC release, leaked images suggest it could be arriving on Xbox One too.

Appearing over the weekend on r/gamingleaksandrumors, this included two pre-release images of Forza Motorsport said to have been taken in July 2021. There’s not much of interest from the photos themselves, these only show a garage and a team looking to start this race, but they reportedly come from an Xbox One build.

That’s since been “verified” by a mod on this subreddit, though it remains officially unconfirmed by Microsoft and Turn 10. Around the same time, separate Forza Motorsport rumors also emerged from Windows Central’s Jez Corden, who advised in the latest Xbox Two podcast that it’s in beta and some influencers have already played it.

Revealed back in July 2020, Microsoft only offered this description on the YouTube video – which you can see below – that stated “Witness the power of Xbox Series X through Forza Motorsport. Automotive entertainment is reimagined for a new generation.”

No Xbox One version was mentioned previously and given how it’s expected to take advantage of newer features, like 4k resolution and ray tracing, it’d certainly be a surprise.

Right now, we still don’t have a release date for Forza Motorsport, but there’s a good chance we’ll learn more next month. E3 might be cancelled but that hasn’t stopped Microsoft announcing the Xbox & Bethesda Showcase 2022 on June 12. If the game’s already being beta tested, it seems likely we could learn more there.

Xbox One support is slowly fading

If this turns out to be true, Forza Motorsport could be the last major first-party Microsoft game launching on the Xbox One. We saw strong cross-generation support last year, with Forza Horizon 5 and Halo Infinite coming to Xbox One alongside Xbox Series X and S, and Smart Delivery means you get access on both platforms without paying twice.

However, 2022 is looking like a different story and right now, the only other upcoming Xbox Game Studios title confirmed for both platforms is As Dusk Falls. Considering it’ll be two years since Xbox Series launched this November, that’s not bad going for the last-gen console.

Microsoft’s been a strong supporter of cross-generation gaming, though we’ve already one new-gen exclusive with Microsoft Flight Simulator. However, upcoming games like Starfield, Senua’s Saga: Hellblade 2, Fable, Perfect Dark, and Avowed are (currently) only confirmed for Xbox Series X and S, signalling the end of an era.

If you’re on Xbox One and can’t make the jump to newer consoles just yet, there’s one potential workaround with Xbox Cloud Gaming. Available to Xbox Game Pass Ultimate subscribers, you’ll need a strong internet connection but this provides a way of playing these exclusives through the older console via streaming.