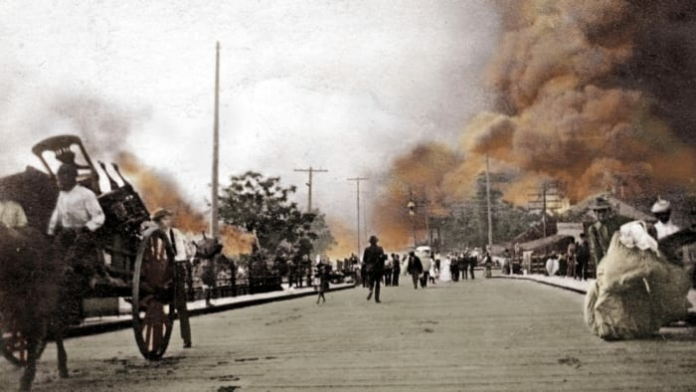 JACKSONVILLE, Fla. – 121 years ago Tuesday — downtown Jacksonville burned to the ground. The Great Fire of 1901 destroyed 90% of downtown.

To grasp the magnitude of the Great Fire of 1901, you need to understand the significance of the downtown area of Jacksonville in 1901.

It was the “it” place to live and run a business. It was home to magnificent mansions, lavish hotels, and the centerpiece of entertainment.

On the northside of downtown, near the corner of Union and Davis streets, was one of several businesses, the Cleveland Fiber Factory. On May 3rd, 1901, workers took their lunch break.

They had laid out another large section of Spanish moss on the huge 200 foot rack that lined the outside of the wooden building to allow it to dry in the warm Florida sun. The moss was used to stuff mattresses and cushions.

Just inside the three-story factory, were other flammable materials like horsehair, feathers, and palm fronds.

On this day, Tuesday, May 3, the watchman hired to extinguish any small fires sparked by errant cinders from nearby chimneys was likely sleeping on the job.

There was very little breeze that day, so no one expected what happened next.

Dr. Wayne Wood, a Historian with the Jacksonville Historical Society, said a cinder from a cookstove happened to land on the moss.

“The fire caught up before they could do anything about it,” he described. “It was roaring across this big drawing platform and they threw water on it and did the best they could, but it caught the warehouse on fire which erupted into a huge explosion that cast these little bits of moss, horsehair, feathers and bits of cinder all over the sky as the wind whipped up to 15 miles per hour blowing toward the city of Jacksonville.”

By 2 o’clock that afternoon, the fire had spread from LaVilla to Hemming Park.

“The grand hotels around Hemming Park, at that time were on fire, and the city was destined to be destroyed,” explained Wood, who wrote a book about the Great Fire of 1901. “By 5 o’clock, in the afternoon most of the area on the north side of downtown was destroyed.”

Downtown residents fled from the flames toward the banks of the St. Johns River, but then became trapped. “The wind did a crazy thing and shifted to the south so all the people who had gathered along the St. Johns River were now in danger,” said Wood. As many as 40 people fled to the Market street dock, but were forced to jump into the river, said Wood, when the dock caught fire. “They leapt into the water for safety just as Mr. Cummer came along in his yacht and pulled them to safety.”

Wood said one of the greatest buildings in downtown Jacksonville at the time, was the Duval county courthouse.

“It was built with walls so thick that nothing could harm it, or so they thought,” explained Wood. After the fire, the walls were still standing, but the interior contents including all the property records and deeds for Duval county were destroyed that afternoon. “Fortunately, a young man whose title company had just made handwritten records of all those deeds saw the fire coming and put his copies of the records in a boat and rowed it across the river to the south side,” said Wood. “That is the basis on which all the property records we have today are based on.”

At the time, Wood said Jacksonville was considered a tourist mecca for residents along the northeast seaboard. The flames from the fire could be seen glowing in the sky from Savannah. “The smoke was seen in the sky from the Jacksonville fire in Raleigh, North Carolina,” explained Wood. “There was an engineer on a ship in Miami that looked up and saw two sunsets, one was in the west and one was in the north. The one in the north was Jacksonville burning,” said Wood describing the magnitude of the fire.

By 8 o’clock in the evening on May 3rd 1901, the fire was smoldering. Hogan’s creek had stopped it from advancing to the north and east. The St. Johns River was on the south; there was nothing left to burn. 90% of Jacksonville burned to the ground. 2,368 buildings along 146 blocks were destroyed. 10,000 people were homeless. 7 people died. Governor William Jennings declared martial law and sent the state militia to Jacksonville.

The day after the fire, the people of Jacksonville started working to rebuild. “They had seven committees, one for feeding the people who needed food,” said Wood. Others he said focused on transportation and fundraising. “It was an amazing recovery, in fact, as bad as the Jacksonville fire was, it was also the catalyst to build a new Jacksonville in two years. “After the fire more buildings had been built in downtown than had existed before the fire,” he said.