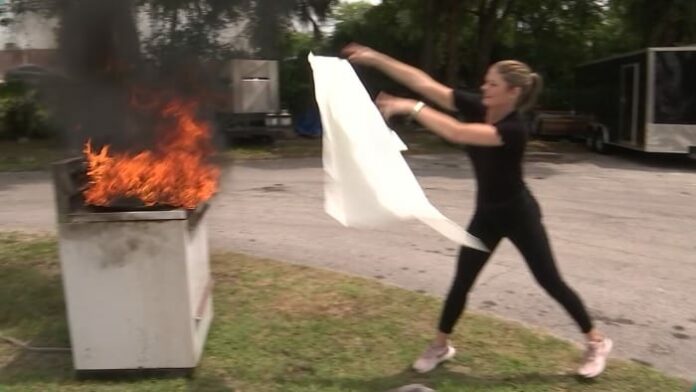 JACKSONVILLE, Fla. – If a fire were to start in your home, would you know what to do? Last year, the Jacksonville Fire and Rescue Department responded to 598 apartment and home fires. Of those, 209 started in the kitchen.

Regardless of where or how a fire breaks out, JFRD says the first step is to call 911, but then what? Grab a fire extinguisher? What about a fire blanket?

It’s a product we found after an ad popped up in our social media feed. We bought two for $35.04. We were not familiar with the fire blanket, so we asked Randy Wyse, the president of the Jacksonville Association of Firefighters, to help us test it.

There are a variety of fire blankets available for sale at places like Amazon and The Home Depot.

The blankets are made of a highly resistant material that can be used to smother a fire. In the ad that popped up on social media, the blanket looked simple enough to use.

However, before our test, Wyse told us that likely wouldn’t be the case when facing a real fire.

“To have a non-trained professional try and get that close to a fire to smother it is concerning,” he said.

We showed Wyse one of the many videos we saw on YouTube of how the blanket is used.

In the video, the person using the blanket faces the flames in a calm manner and then easily covers the fire with the blanket. But Wyse, said you are likely not going to be calm in real life.

“You are going to be in panic mode for sure,” he said.

We asked Wyse to simulate as close to a real-life situation as possible for us to test the fire blanket ourselves – but with his expert supervision.

In the middle of the field, an old oven was set up. We covered the oven with diesel and started a fire. The flames grew quickly and getting close to them was intimidating.

“That’s why we recommend you stay away and why with these blankets, there is some concern that they would face some burns. But if you stayed far enough away you would not,” said Wyse.

As flames grew even the professionals questioned our test.

“Are you really going to do this?” Wyse asked us.

“Throw it, I’m going to throw it,” Lauren Verno responded.

And just as Lauren seemed confident, the flames got so hot the glass on the over exploded.

Lauren admits, she started to question the test herself — not wanting to get as close to the oven as she needed to.

Lauren got as close to the oven as she felt comfortable and threw the blanket towards the flames. It quickly fell off.

We let Wyse try, but by then, most of the fuel had burned off. He was able to get much closer when he threw it. The blanket slid off the oven.

We decided to try again because the wind had picked up when we attempted the first time.

This time, Lauren got much closer and was able to get the blanket to stay over the flames.

Then, the flames shot through the sides of the blanket, the fire still burning.

Wyse gave the blanket a thumbs down.

Wyse says to look for a UL listing on the packaging which means a product has been tested and determined that the product meets specific, defined requirements.

The fire extinguisher we brought to the test had the UL right on the box and on the device. Nothing on the blanket.

The cost of two fire blankets was also relatively the same it costs for two fire extinguishers.

If you’ve never used a fire extinguisher, Lauren learned firsthand not to be intimidated.

“There was no comparison. I would pick the fire extinguisher every time,” Lauren said.