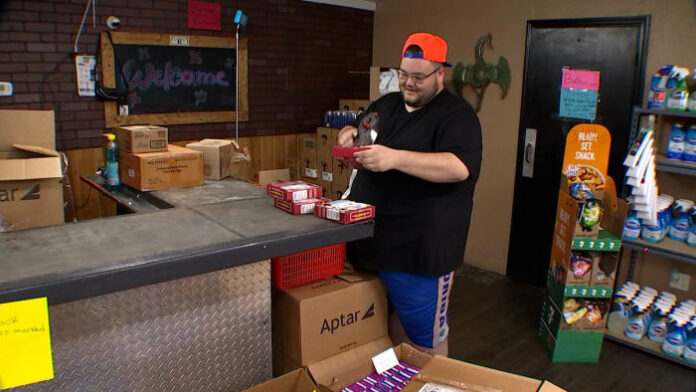 MARION COUNTY, Fla. – James Brandl always knew he wanted to be in the grocery business. He also knew he liked helping people. As a kid he’d cut coupons and pass his savings on to others.

Today, Brandl runs a small grocery liquidation store in Belleview, near Ocala, called The Coupon Kid, where he’s earned a reputation for selling discount items and helping those who need it.

The Coupon Kid Sales and Liquidation isn’t the type of store where you bring a shopping list.

“I never know what we’re getting,” said Brandl, as he walked the isles, pointing out some of the unique items. “The staff asks me, ‘What’s coming?’ I have no idea. When we open those truck doors it could be potato chips or it could be cookies. It could be anything in the world. Hopefully it’s not too heavy.”

The shelves are stocked with everything from common dish soap to specialty foods such as Fire Cracker Red Hot Pickled Sausage. Everything is sold at a discount.

Katha Phillips Hagood shops there when she can. She’s on a budget and said she appreciates the prices.

“I live 20 miles out and with gas being what it is I haven’t been here in a while,” she said. “Every time you check out you’re like wow that’s all.”

Brandl walks by boxes of unopened products stacked above his head.

“We’re actually growing out of this building,” he said. Eventually we’re going to have to get a bigger building.”

The business is a contrast from where he started, cutting coupons in his living room as a kid. In a way, it’s also an extension of his charitable beginnings.

He was introduced to couponing at age 15 by a friend’s mom.

“I was like, ‘Let’s see if I can do it,’” Brandl remembered. “I came home with 200 boxes of noodles and 96 things of cinnamon rolls. We paid 14 bucks for everything and I went to the neighbors and said, ‘You’re not going to believe what I just did.’”

He gave most of it away, and at that point, he was hooked.

Brandl said his neighbors and others in need would often benefit from his deals. He would donate school supplies and toiletries to the nearby elementary school.

“It’s not a big deal. I said, ‘You’re not going to believe how I’m getting this stuff,’” Brandl recalled. “You can really save money doing this.”

He became known as “The Coupon Kid.”

Always on the lookout for a deal, Brandl then began buying overstock and close out items from large retailers.

Today, Brandl continues to give back to his community. He’s developed a reputation for helping people in need. The store’s Facebook page is full of examples of people thanking him for his generosity.

“I’ve never really been a person to sit back and say someone else will take care of it,” Brandl said. “I’m the person to stand the line and say, ‘Hey, we got to do something.’”

Brandl was nominated for the News 6 Getting Results Award by customer Patti Wilkinson.

“I have witnessed James listening to a mom as she was cashing out say that she was limited on funds and barely had the necessities,” Wilkinson wrote in an email. “James quickly reacted and their needs were taken care of. He never let her feel ashamed in any way. He simply told her that it was what he wanted to do(:) help.”

Brandl has helped families after car crashes, when they’ve lost a loved one or just had trouble making ends meet. He has helped the local little league and has a giveaway at Christmastime.

Ann Baylis shops at The Coupon Kid about twice a week. She remembered a family who had an apartment fire. Brandl helped them too, giving them free groceries.

“I’m getting goose bumps,” Baylis said, recalling the story. “That means a lot. He’ll do whatever he can.”

Brandl said he loves what he does and hopes to open more stores in other locations. But it’s not about making more profits, he said; it has more to do with helping more people.

“The Coupon Kid is not just a way of making money,” Brandl said. “To me, it’s never been that way. It’s always been to help people out.”

Wilkinson hopes “The Coupon Kid” and his team get the recognition they deserve.

“Please show James, his mom and his hard working staff that they are seen, heard and recognized for all they have done and will continue to do in this community,” Wilkinson wrote.