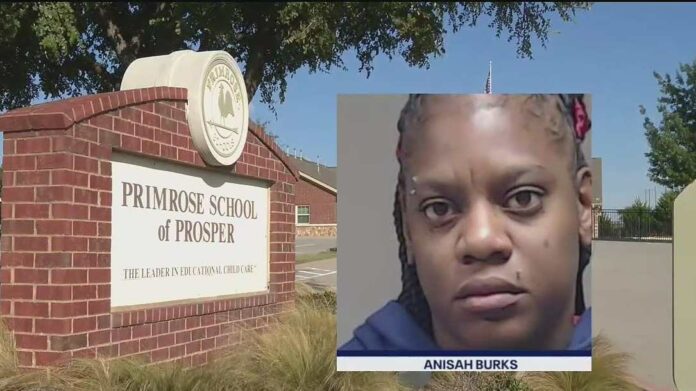 Anisah Burks, 35, was arrested on four counts of injury to a child and one count of possession of a controlled substance after four children at Primrose School of Prosper displayed “unusual symptoms of illness” and were hospitalized.

Police arrested a Texas preschool teacher after four children were hospitalized on Halloween following alleged exposure to THC, the active ingredient in marijuana, according to police and the school.

Four children at Primrose School of Prosper, a preschool about 40 miles north of Dallas, displayed “unusual symptoms of illness” and were hospitalized on Monday after being exposed to THC through a teacher, according to a statement franchise owner Mike Casey provided to NBC News.

Anisah Burks, 35, was arrested on four counts of injury to a child and one count of possession of a controlled substance following the incident, Collin County jail records show. A representative for Primrose School of Prosper confirmed Burks was a teacher there.

Burks was deemed ineligible for a court-appointed lawyer at the time of her arrest and does not currently have one, according to the Collin County District Clerk’s Office.

Recreational use of marijuana remains illegal in Texas, according to state law.

Burks was “immediately terminated” from her employment at the school following the incident, according to the statement from Casey, which added that school officials called 911 and evacuated the building after observing the children’s symptoms.

Emergency medical personnel transported three of the children to a hospital, and a fourth was taken to a hospital by their parents after being picked up from the school, police said, adding that all children have since been released from the hospital.

Casey said the school was closed on Tuesday and would reopen Wednesday. His statement added that the school conducts background checks on all teachers and staff members — which included Burks — and added that “this was an isolated incident involving one teacher who was immediately terminated.”

“This news has been shocking, upsetting and shakes us to the very core of every principle we stand for,” Casey said in the statement. “There is no greater priority to us every day than the health and safety of the children entrusted to our care.”