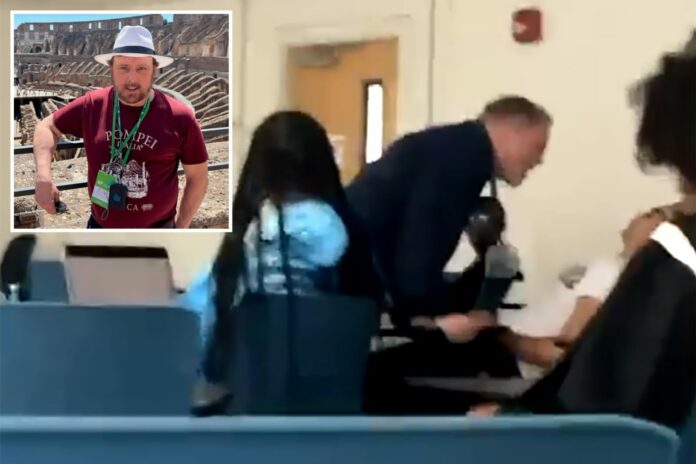 A Tennessee State University professor has been fired over a video that emerged of him screaming at a student after they failed his course, officials said.

History professor Robert Evins Pickard was caught on video intensely shouting in a student’s face before kicking them out of the classroom.

In the widely circulated video, Pickard loudly yells, “What is your name?” and “Get out! You have failed this course, whatever your name is! Out! Out! Out! Out!”

The university said in a statement Tuesday that it took “swift action including personnel action” to address the incident, including terminating Pickard from his position on staff.

“TSU does not tolerate unprofessional behavior in its classrooms or otherwise directed at students,” the statement read.

“The University is committed to providing a healthy and positive academic environment for all students. This incident runs afoul of the standard of behavior we expect from those charged with teaching and serving as role models for our students.”

In his own statement to WSMV, Pickard said he had retired following the incident.

“I deeply regret what happened in class. I lost my temper and did something I should never have done,” he said to the TV station.

“I have been under pressure lately, and I have been frustrated with students who pay attention to their cellphones and laptops, then wonder why they get low grades. But that does not excuse my behavior. I apologized to the students and offered my resignation. I am now retired, as I had planned anyway. Please respect my privacy, it is over now.”

Students who shared the viral video on Twitter said Pickard frequently yells at his students in a similar manner.

One Twitter user who reposted the clip wrote, “This professor is at Tennessee State University and apparently talks to students like this all the time. Something needs to be done.”