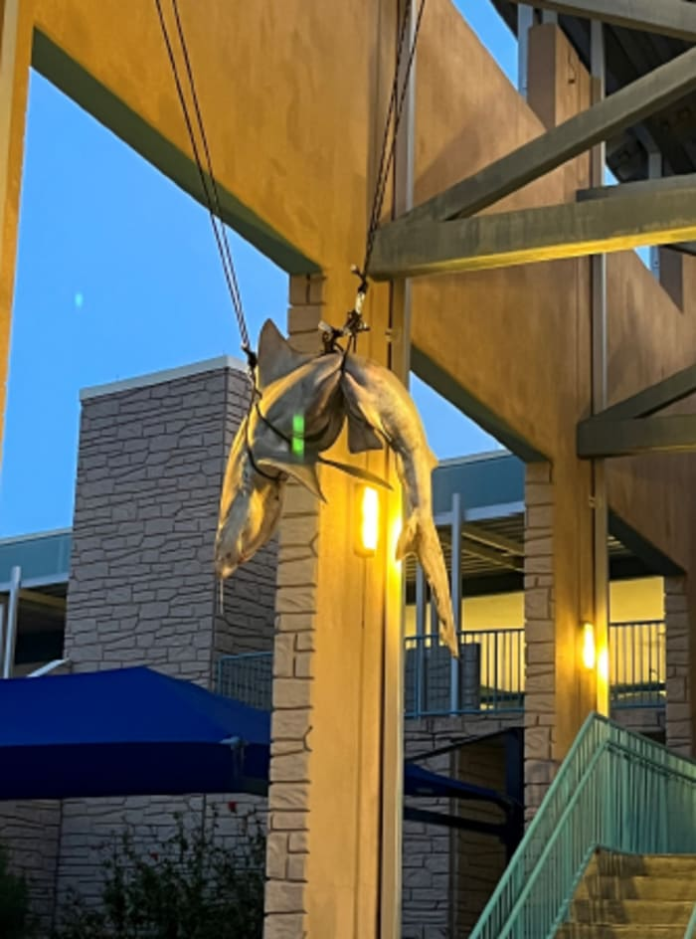 Two teenagers got a bull shark from a stranger who caught it in Mayport last week and then they gutted it and stored the dead fish with ice overnight at a friend’s house before hoisting it from the rafters at Ponte Vedra High School as a senior prank, according to an incident report from the Florida Fish and Wildlife Conservation Commission obtained Wednesday by News4JAX.

School officials said that five Ponte Vedra High students have been identified by investigators as having hoisted the dead shark at the school on Davis Park Road. The FWC report lists two 17-year-olds and three 18-year-olds as being involved, as well as a 19-year-old.

The report shows one of the 18-year-olds told an FWC investigator that he and another one of the 17-year-olds were fishing in Mayport the night of May 3 when a man next to them caught a bull shark. He said they asked the man if they could keep the shark, and he gave it to them. The teen said they wanted to use it for a senior prank, so they gutted it and then stored it in the 19-year-old’s yard with ice.

The 17-year-old who was also fishing in Mayport that night said they bought the shark for $100 from the stranger, according to the FWC report. He also told the investigator that he drove the shark in his truck bed from the friend’s house to the school the next night.

About 9 p.m. May 4, according to the FWC report, the 18-year-old and 17-year-old who got the shark and three other teens, ages 17 and 18, went through an open gate through the back of the school, rolled the shark in and lifted it onto the rafters using a pulley system. and ladder. The 19-year-old was the lookout at a nearby Gate gas station in case anyone drove into the school, according to the report.

The following morning, according to the FWC report, a Ponte Vedra High maintenance worker arrived at work around 7:30 a.m. May 5 and found a dead shark hanging from the rafters off the stairway in the front courtyard. He placed a dumpster under the shark and cut the ropes holding it. He told the FWC investigator that the shark landed in the dumpster and was then taken to a landfill by the maintenance crew. From there, the shark was moved to Georgia for disposal.

The investigator for FWC, which is leading the investigation, gathered photos of the shark hanging from the rafters at the school and sent them to two of the agency’s marine shark biologists, who did confirm the shark was a bull shark.

“The shark was identified as a Bull Shark, which is legal to possess. The legal size limit for a Bull Shark is 54 inches. Based on the pictures provided by students, I determined the Bull Shark to be over the legal size of 54 inches,” the FWC investigator wrote in the report. According to the FWC website, harvestable Group 2 sharks — seven species that include bull sharks — have a 54 inch (fork length) minimum size limit.

The report said this information was presented to the State Attorney’s Office.

The school on Wednesday sent a statement to News4JAX saying, “The shark was removed prior to notification to FWC. This was a unique situation and as you can imagine not one that the staff at PVHS has encountered before. They wanted to avoid creating a stressful situation for any individuals or students arriving on campus.”

According to the school district, the consequences of this level four discipline violation will be decided by the discipline committee.

Meanwhile, oneProtest, an animal advocacy group, started an online petition on change.org calling for signatures in support of seeking charges against the five students identified by investigators.

And PETA (People for the Ethical Treatment of Animals) said it sent a letter to St. Johns County School District Superintendent Tim Forson on Tuesday offering lessons on kindness to animals after the incident.