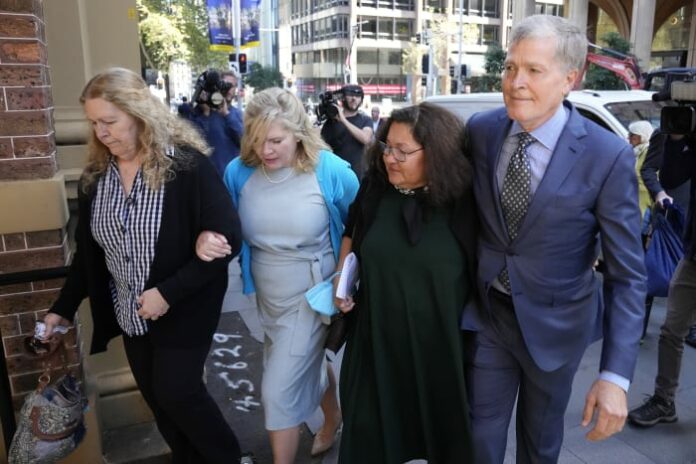 CANBERRA – A man told police he killed American mathematician Scott Johnson in 1988 by pushing the 27-year-old off a Sydney cliff in what prosecutors describe as a gay hate crime, a court heard on Monday.

Scott White, 51, appeared in the New South Wales state Supreme Court for a sentencing hearing after he pleaded guilty in January to the murder of the Los Angeles-born Canberra resident, whose death at the base of a North Head cliff was initially dismissed by police as suicide.

White will be sentenced by Justice Helen Wilson on Tuesday. He faces a potential sentence of life in prison.

“I pushed a bloke. He went over the edge,” White said in recorded police interview in 2020 that was played in court.

White said in the interview he lied when he had earlier told police that he had tried to grab Johnson and prevent his fatal fall.

A coroner ruled in 2017 that Johnson “fell from the clifftop as a result of actual or threatened violence by unidentified persons who attacked him because they perceived him to be homosexual.”

The coroner also found that gangs of men roamed various Sydney locations in search of gay men to assault, resulting in the deaths of some victims. Some people were also robbed.

A coroner had ruled in 1989 that the openly gay man had taken his own life, while a second coroner in 2012 could not explain how he died.

His Boston-based brother Steve Johnson maintained pressure for further investigation and offered his own reward of 1 million Australian dollars ($704,000) for information. White was charged in 2020 and police say the reward will likely be collected.

White’s former wife Helen White told the court that her then-husband “bragged” to their children of beating gay men at the clifftop well-known for gay meetups.

Helen White said she read a newspaper report in 2008 about Johnson’s death and asked her husband if he was responsible.

“It’s not my fault,” Scott White allegedly replied. “The dumb (expletive) ran off the cliff.”

“I said, ‘It is if you chased him,’” Helen White told the court. She said her husband did not reply.

Under cross-examination, Helen White denied she had been aware of a AU$1 million reward for information on Johnson’s murder when she reported her former husband to police in 2019. She said she only became aware of a reward when the victim’s brother, Steve Johnson, doubled the sum in 2020.

Steve Johnson said in his victim impact statement that, “With a vicious push, Mr. White took Scott and he vanished.”

“This man (Scott Johnson) who once told me he could never hurt someone even in self-defense died in terror,” the brother added.

“If he had turned himself in after his violent action, I would have had a little more sympathy. If he had grasped Scott’s hand and pulled him to safety, I would owe him everlasting gratitude,” the brother said, his voice choked with emotion.

Rebecca Johnson, a younger sister, said the police report of suicide “made no sense.”

“How could a community fail so spectacularly that they created boys capable of such horror?” she asked, referring to media reports of gay beatings in Sydney being described as a sport.

Prosecutor Brett Hatfield said the precise details of the murder were not known and that White’s accounts had varied.

White had met Johnson in a nearby bar in suburban Manly and Johnson had stripped naked at the clifftop before he died, Hatfield said. He said the gravity of the murder was significantly elevated because it was motivated by the victim’s sexuality.

White’s lawyer Belinda Rigg said her client was gay and had been concerned that his homophobic brother would find out.

In January, White yelled repeatedly in court during a pre-trial hearing that he was guilty, having previously denied the crime.

His lawyers will appeal that plea in the Court of Criminal Appeals and hope he will be acquitted at trial.

Scott Johnson was a doctoral student at Australian National University and lived in Canberra. He was staying at Noone’s parents’ Sydney home when he died.