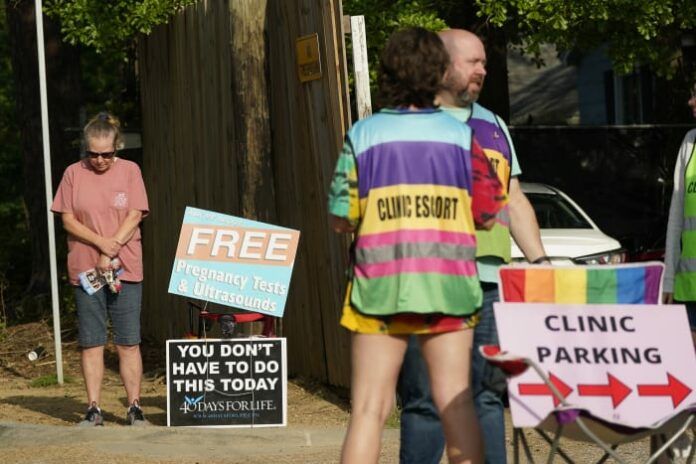 The owner of an Alabama abortion clinic was flying home from a conference with other abortion providers Monday night when a leaked Supreme Court draft opinion began ricocheting around the world.

As Dalton Johnson read it, he was struck by the harshness of the language that would end the constitutional right to an abortion, shuttering clinics in about half of American states, including his.

People on both sides of the abortion divide have been expecting the Supreme Court this summer to reverse the landmark 1973 Roe v. Wade case that legalized abortion nationwide. But many said it was still staggering to see the draft opinion, forcing them to reckon with the reality the nation is likely to soon enter.

“I can’t stop crying,” said an elated Mississippi state Rep. Becky Currie, who sponsored the 2018 law that is the basis for the Supreme Court case. “I am not quite sure I have the words to express how I feel right now, but God has had his hands on that bill since the beginning.”

The leaked draft, published late Monday by Politico, is a 98-page majority opinion in Dobbs v. Jackson Women’s Health Organization, which challenged the constitutionality of Currie’s bill that banned abortion after the first 15 weeks of pregnancy.

Johnson, who owns the last abortion clinic in Huntsville, Alabama, said he was stunned by the certainty of the language. “Roe was egregiously wrong from the start,” the draft opinion states. It was signed by Justice Samuel Alito, a member of the court’s 6-3 conservative majority who was appointed by former President George W. Bush.

The draft opinion that circulated in February does not represent the court’s final word, and the language could change before the court issues its ruling. But if the heart of the draft remains the same, it would give states the power to decide the legality of abortion. More than half are likely to quickly ban abortion.

Abortion clinics in those states opened Tuesday morning, still seeing patients but uncertain about the future.

The daily rituals unfolded as they always do: protesters screamed at people walking inside, clinic escorts tried to shield them and hustle them in the doors.

“Please overturn Roe v. Wade,” said Barbara Beavers, who stood outside the clinic in Jackson, Mississippi, on Tuesday, trying to persuade people against going inside. “Have mercy on our unborn children. We’re destroying our future, killing our babies.”

Jean Folsom stopped by the clinic on her way to work, to thank the volunteers who help pregnant people pass protesters like Beavers.

“I really appreciate their efforts, and obviously based on the news last night, I’m worried that this is one of the last times I’ll see them,” said Folsom. She and her family eat breakfast every Saturday at a coffee shop near the clinic, and always felt grateful for the volunteers willing to help people in a state where opposition to abortion is strong.

Clinic administrator Shannon Brewer has said physicians travel from other states to work at Jackson Women’s Health Organization because local doctors are either unwilling to do abortions or do not want to face the social pressure that comes with working at the clinic.

Folsom said she felt devastated when she read the news Monday night.

“I kind of can’t believe that I live in a country where things seem to be moving backwards,” she said.

Inside clinics, the news prompted frantic phone calls. People were confused about whether abortion remains legal, and for how long.

At Johnson’s clinic in Huntsville, the phone was ringing more than usual Tuesday. Women called to ask whether they can still get an abortion. They tried to move up appointment times. Johnson said his first call of the morning was from a woman who had an abortion scheduled for Friday and wanted to come in Tuesday.

The staff held a meeting, and Johnson says he asked them to focus on the women who are still coming for abortions who need their help. The opinion was just a draft, he told them, and cautioned that it wasn’t the final decision.

Outside an abortion clinic in Louisville, Kentucky, Angela Minter said she prayed the draft opinion will be the final one.

“I’m excited today,” Minter said. “I believe it’s an indication of what’s to come. I believe that the decision is going to come down and it will hold true in June, that Roe v. Wade will be overturned, and that’s a good thing.”

The Louisville clinic was closed for a week last month after the legislature banned abortion, until a court intervened. But if Roe falls, it will likely be shuttered again. Minter thinks that’s God answering her prayers: she’s been coming to the clinic most mornings since 2004. She said she had two abortions as a teenager before she was born again into Christianity. She now believes they should be banned completely, no exceptions, and the leaked opinion gave her hope that will happen.

“Abortion is not the answer for us,” she said, “it’s cost us too much.”

Patients tried to dodge her and the other protesters screaming outside. “Don’t murder your baby,” one man shouted at a young woman. Clinic escorts in orange vests helped her into the building.

Christine, a clinic escort who asked that her last name not be used for safety reasons, said she wasn’t surprised by the opinion. They’ve known it was coming a long time.

But as she read through the opinion, she too was startled at the wording. It felt that if abortion falls, anything else could be next: gay marriage, birth control, any civil right not explicitly written down in the Constitution.

“The hole is bottomless, the depths are never-ending,” she said.

She’s worried about what will happen to pregnant people in places like Kentucky, where abortion will be banned in nearby states in every direction, making it more expensive for those who would need to travel to get an abortion. The closest state will probably be in Illinois, a four-hour drive away.

People with enough money will always find a way, she said. It is the poorest who will suffer, and abortion rights activists are pivoting now to help them travel, she said, because desperate people do desperate things. They’re terrified of returning to the pre-Roe world of dangerous back-alley procedures.

The harsh reality felt more certain Tuesday than it had before.

“Hope has left the building,” she said.