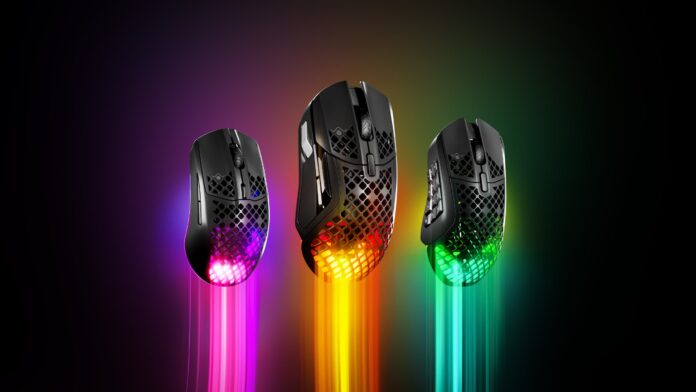 In brief: SteelSeries is giving fans of lightweight mice reason to celebrate with the launch of three successors to its popular Aerox 3 Wireless mouse, including a wired peripheral and one explicitly designed for MMO and MOBA games.

The SteelSeries Aerox 3 Wireless has been one of the best-reviewed mice for those who love the popular honeycomb design. The company says its Aerox 5, Aerox 5 Wireless, and Aerox 9 Wireless mice build on their predecessor by offering the same feel and speed but with more configuration options.

Weighing 66g, the Aerox 5 is the “lightest multi-genre mouse on the planet,” according to SteelSeries. It comes with nine programmable buttons and is the only one of the three that’s wired. It also features the company’s golden micro IP54 switches (rated for 80 million clicks), TrueMove Air precision optical sensor, and three RGB zones. And despite all those holes, it has an IP54 safety rating for water protection. It sells for $79.99.

Those who prefer to be untethered can opt for the Aerox 5 Wireless. The slightly heavier 74g weight could be forgiven as it boasts a 180-hour battery life and a charging speed that offers 40+ hours of use after a 15-minute charge via USB-C. The wireless connection comes via 2.4GHz or Bluetooth 5.0. It costs $139.99.

Finally, there’s the Aerox 9 Wireless mouse. Like the Razer Naga and Logitech G600, this mouse packs several buttons on the side (12, in this case) and is designed for MMOs and MOBAs where quick access to numerous macros is an advantage. SteelSeries says the Aerox 9’s 89g weight makes it the lightest mouse of this kind on the market. It shares most of its specs, including battery life, with the Aerox 5 and costs $149.99