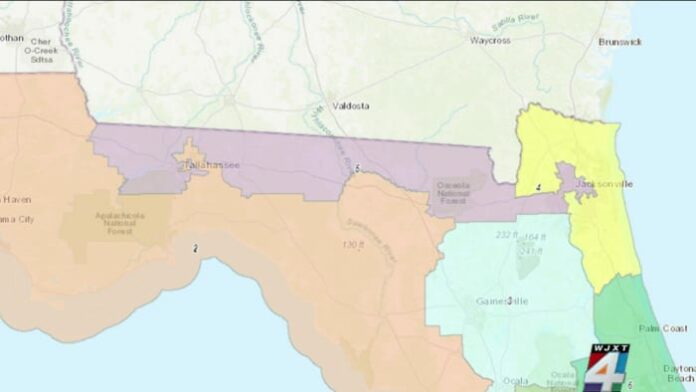 TALLAHASSEE, Fla. – Little more than an hour after a judge issued a temporary injunction against a new congressional redistricting plan, Gov. Ron DeSantis’ administration Thursday launched an appeal that put the ruling on hold.

Attorneys for Secretary of State Laurel Lee, a defendant in the lawsuit filed by voting-rights groups and other plaintiffs, filed a notice of taking the case to the Tallahassee-based 1st District Court of Appeal.

The notice triggered an automatic stay of the ruling by Leon County Circuit Judge Layne Smith, effectively meaning that the ruling will be on hold until the appeals court makes a decision about the temporary injunction. A court rule requires automatic stays when the state files such appeals, though it is possible for plaintiffs to try to get stays lifted.

Smith said during a hearing Wednesday that he would grant the plaintiffs’ request for a temporary injunction and require redrawing part of a redistricting plan that DeSantis pushed through the Legislature during a special session in April.

The voting-rights groups and other plaintiffs filed the lawsuit April 22 after the Republican-dominated Legislature passed a redistricting plan that is expected to boost the number of GOP representatives in Florida’s congressional delegation. The plaintiffs also asked for a temporary injunction, focusing an overhaul of North Florida’s Congressional District 5.

After a 2015 Florida Supreme Court decision, District 5 has stretched from Jacksonville to west of Tallahassee. It was designed to help elect a Black representative and is held by Congressman Al Lawson, a Black Democrat.’

But under the DeSantis-backed redistricting plan, lawmakers dramatically changed the district to condense it in the Jacksonville area. DeSantis contended that keeping the sprawling east-west shape of the district would involve racial gerrymandering and violate the Equal Protection Clause of the U.S. Constitution.

In a court document filed Monday, the state’s attorneys wrote that the Equal Protection Clause bars “race-based sorting of voters” without a “compelling interest” and a “narrowly tailored” means to achieve that interest.

But the plaintiffs in the lawsuit said the revamped district violated a 2010 state constitutional amendment — known as the Fair Districts amendment — that set standards for redistricting. Part of that amendment bars diminishing the ability of minority voters to “elect representatives of their choice.”

In issuing the temporary injunction, Smith wrote that the plaintiffs had shown a “substantial likelihood of proving that the enacted plan violates the non-diminishment standard” of the Fair Districts amendment.

Smith also rejected the DeSantis administration’s arguments about the Equal Protection Clause and whether a compelling interest existed for keeping the east-west shape of District 5. He wrote, in part, that “compliance with the Fair Districts amendment’s non-diminishment provision is a compelling state interest.”

Also, he wrote that “addressing the history of voting-related racial discrimination and a lack of representation in North Florida in itself constitutes a compelling state interest.”

“Plaintiffs presented evidence that, for much of Florida’s history, Black voters in the state have been unable to participate equally in the electoral process, with Black residents of North Florida experiencing particularly severe burdens in access to the franchise,” wrote Smith, who was appointed by former Republican Gov. Rick Scott in 2015 as a county judge and was elevated by DeSantis in 2020 to circuit judge.

In the injunction, Smith ordered the use of a map proposed by an expert witness for the plaintiffs. That map would keep the east-west configuration. As is common, the notice of appeal did not detail arguments that the state will make at the appellate court.