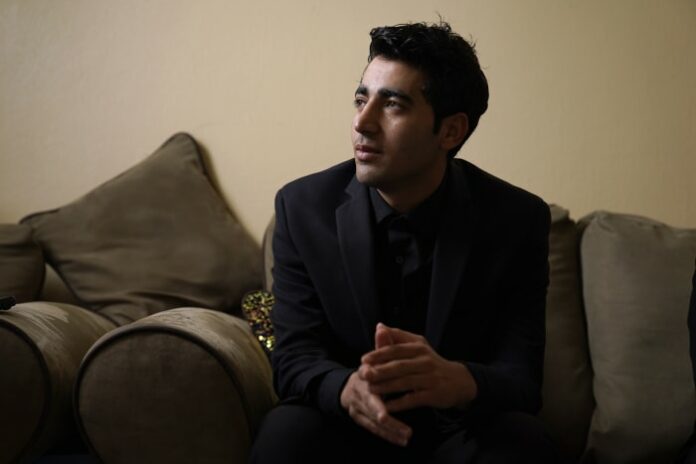 ST. LOUIS – Inamullah Niazai sits on the front porch step of his red-brick St. Louis home and smiles at the bustle of activity around him — his mother and father chatting in the front yard, his two young daughters munching chocolate ice cream bars.

“Anything is possible here,” Niazai, 23, said. “We are so lucky that my family can be here, together.”

An aggressive effort in St. Louis is trying to lure Afghan refugees like Niazai. About 600 have arrived so far and another 750 are expected later this year.

Civic leaders are hopeful that over the next few years, thousands more will decide to relocate to the Midwestern city, helping to offset seven decades of population loss and rejuvenate urban neighborhoods — just as the arrival of Bosnian refugees did three decades ago.

It’s been nearly nine months since the Afghan capital of Kabul was ceded to the Taliban. Since last summer, more than 76,000 Afghan refugees have relocated to the U.S. While California and Texas have taken in most of the displaced Afghans, many will eventually go elsewhere.

In the 1990s, St. Louis became America’s most popular landing spot for Bosnians displaced by war in the former Yugoslavia. Among the estimated 300,000 who fled to the U.S., some 40,000 now call St. Louis and the region home.

They revitalized an area of the city’s south side that is now often referred to as Little Bosnia. The area features Bosnian-owned markets, coffee shops, auto repair shops and other businesses. They have their own online newspaper, their own chamber of commerce.

The Bosnians also provided a badly needed population boost in a city that’s been losing people at an alarming rate, dropping from a peak of over 850,000 in 1950 to just under 300,000 today.

St. Louis’ Afghan Resettlement Initiative is backed by over $1 million in donations and more than 800 volunteers, and it has support from the Roman Catholic Archdiocese of St. Louis, the International Institute of St. Louis and other nonprofit groups. Advocates say they’ve received no opposition to their efforts.

Jerry Schlichter, an attorney who is the organizer and a major funder, said the initiative helps find housing and jobs, connects new arrivals to training such as classes on computer coding, and provides grants for business startups.

The St. Louis effort also provided money to establish an online Afghan newspaper, a chamber of commerce and a community center.

“There’s a mutual need. We have been stagnant,” Schlichter said. “With this one-time opportunity with Afghan refugees ending up somewhere in this country, we should take advantage of it.”

Arrey Obenson, president and CEO of the International Institute of St. Louis, said he’s confident that the new refugees will revitalize neighborhoods, just as the Bosnians did.

“The reality of the circumstance we face is that if we look at St. Louis city and the rate the population is declining, we have to find a way to bring people into the community to turn that around,” Obenson said.

St. Louis isn’t the only city with a declining population trying to attract Afghan refugees.

Detroit also reached its population apex in 1950, when 1.85 million people lived there. Today, the population has dropped by two-thirds, to about 640,000.

Detroit corporate and community leaders in April launched the Detroit Refugee Network, with hopes of raising more than $1 million to provide services such as housing, education, transportation and language training. About 250 Afghan refugees have settled in Detroit, with another 400 or so elsewhere in southeastern Michigan.

Tobocman and Alan Mallach, a senior fellow with the Center for Community Progress, studied two Detroit neighborhoods filled with immigrants from Bangladesh, Yemen, Mexico, and Central and South America. Those two neighborhoods have grown by nearly 50% in the past two decades or so.

The result is less crime, well over 100 new businesses and reductions in home vacancies and tax foreclosures, the study found. Residents surveyed were more satisfied and optimistic than Detroit residents as a whole.

A major hurdle for Afghan refugees is housing. Across the country, thousands still live in hotels.

But by early May, only two Afghan families were still in St. Louis hotels because the initiative has a program guaranteeing payment to landlords, Schlichter and Obenson said.

Niazai, his wife and their two young daughters fled Kabul last year. They were sent first to Washington, D.C., then to temporary housing in Texas. They chose to end up in St. Louis because other relatives were already here.

The initiative helped find them a place to rent — a brick home on a quiet street a few miles south of the Gateway Arch that now is home to 11 family members. Volunteers provided furniture, food and what Niazai called “welcome money.” Someone even gave him a car.

Niazai said he feels at home in St. Louis.