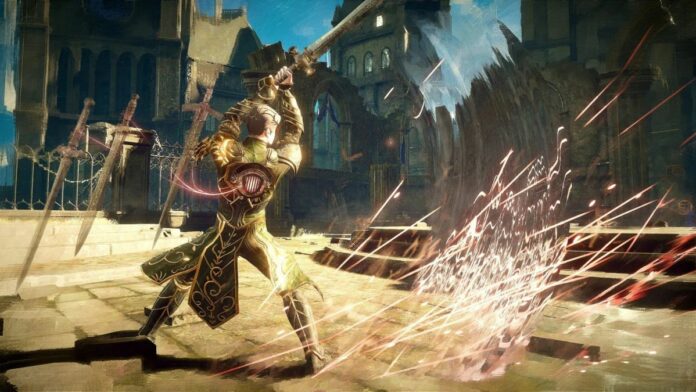 Babylon’s Fall, the latest co-op action RPG from Square Enix and Platinum Games, struggled to attract an audience when it launched last March, and has fallen below 10 concurrent players on PC for the first time

As game-tracking site SteamCharts shows, only eight players booted up Babylon’s Fall on Steam during one point on April 13, marking a new low for the ailing game. As of press time, a paltry 93 people were playing, and it’s attracted an average concurrent player count of only 149 across the last 30 days.

Players have been drifting from the game since it launched at the beginning of March. It failed to draw an audience, peaking at only 1,188 players the day after release. Critics were not kind, either, awarding it low review scores. On Metacritic, it’s currently listed as the second-worst release of the year so far and the worst-reviewed PS5 game.

Its release date did it no favors, either. Coming out shortly after Horizon Forbidden West and less than a week after Elden Ring, it quickly found itself in the shadow of other major triple-A releases.

Does Babylon’s Fall have a future?

However, Square Enix has since explicitly addressed the future of the game, insisting its longevity is not in danger.

“There are no plans to reduce the scale of development on Babylon’s Fall,” the game’s official Twitter account said in a statement last month.

“Content up to the end of Season 2 is now practically complete and we have started work on Season 3 and beyond,” it continued.

“We will continue to provide new content for the game and make improvements based on player feedback, striving to keep existing players playing and to attract newcomers.”

The publisher has also previously released a survey asking fans how Babylon’s Fall could be improved. It paid particular attention to the game’s UI and graphics, which are deliberately styled to ape the brushwork of oil paintings. It asked players which features would encourage them to recommend the game to a friend and if they’d be more likely to do so after graphical tweaks were made.

Square Enix will likely be disappointed with the sales of Babylon’s Fall, but its meager player count also undermines the game’s live-service business model. Pitched as a multiplayer co-operative action RPG, it launched with a season of expansion content, as well as lots of microtransactions and optional purchases.

Without a large player count, it will be a struggle to get a team together to play through the additional content. And without a dedicated playerbase, future seasons of DLC likely won’t produce the return Square Enix hopes for. The publisher may have envisaged a long lifespan for Babylon’s Fall, but if the player count doesn’t increase, that may be cut short.

This isn’t the only recent triple-A release that’s struggled to maintain a functional playerbase. Battlefield 2042 has seen an exodus of fans who are disappointed with its persistent glitches and slow rollout of updates. Dice’s multiplayer shooter has now fallen below 1,000 concurrent players on Steam, with many moving to an indie Battlefield clone for their squad-based FPS fix.