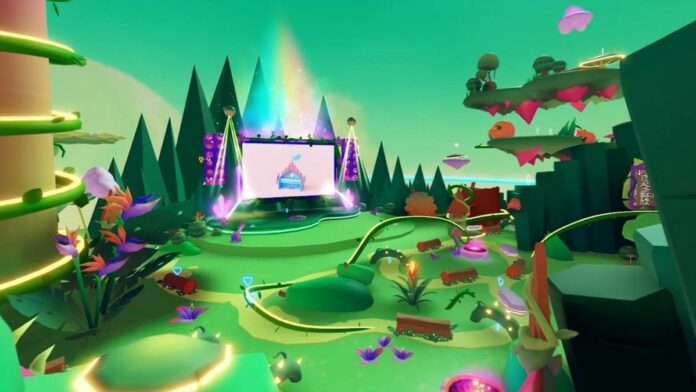 Throwing its hat into the metaverse ring, Spotify has launched a new digital space with a revolving theme where players can come in to create music and play games.

The aptly named Spotify Island is available on Roblox, although the name is a little misleading. Judging by the trailer and the early YouTube videos, the space is more of an archipelago as players can hop from island to island with a large central hub in the middle.

Since it’s all centered around music, the big island houses a big-screen stage for concerts and “beat-maker stations powered by Soundtrap.” You can play in this world by downloading it from Roblox.

Soundtrap is an online audio station owned by Spotify that people can use to make music with it or record a podcast. But since this is a kid’s game, music-making is pretty rudimentary.

Throughout the digital world, you’ll come across these pink stones that create a sound when pressed. It doesn’t appear that there will be a way to record these basic beats in-game, however. Your friends have to be there in person to enjoy your creation, so to speak.

If you’re not musically inclined, there are other game modes to enjoy. You can climb to the top of the leaderboard by collecting points or go on an Easter Egg hunt to gain some exclusive merch. Speaking of which, Spotify is working on a program to allow fans to partner up with the company to create in-game merch.

And a portion of those profits will go back to the music artist featured in the merch. But this program is still in the works and there’s no information on when it will be implemented.

Spotify Island isn’t a static world, as it’ll undergo thematic changes. The first theme is K-Park, which is inspired by K-Pop music. In fact, the island will host two K-Pop artists later this Spring.

K-Pop singer SUNMI and boy group Stray Kids will interact with fans at Spotify Island within the coming weeks, but there’s no confirmed date.

Since this is a kid’s game, it’s probably safe to assume that hardcore rap or death metal won’t be a future theme.

A recurring theme with these open-world sandbox games is expansion into kid-centric spaces. Minecraft took the first steps with its Education Edition for schools.

Epic Games, creator of Fortnite, is expanding into this genre too as it’s teaming up with The Lego Group to create a metaverse playground for children.

There are few bigger names in the kid world-building space than Roblox, and now, with Spotify’s help, it’s extending out into music, with a kid-safe flare.