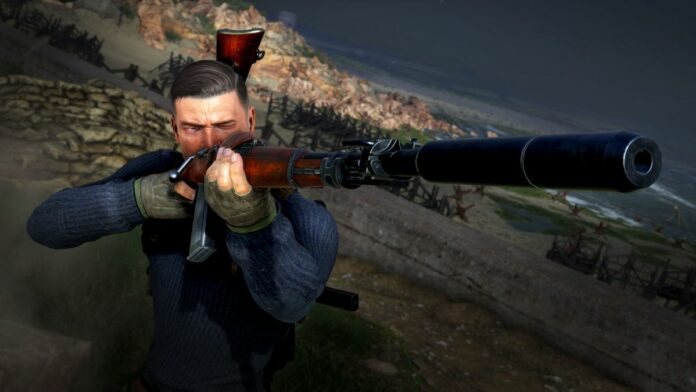 Sniper Elite 5 isn’t a radical reboot:  the long-running World War 2 shooter again challenges you to snipe, shoot, and stealth your way to victory over the Nazis in a succession of open-world missions, set on large maps studded with hidden items and secondary objectives. As in Sniper Elite 4, it supports two-player drop-in/drop-out co-op play, along with 16-player adversarial multiplayer, and a three-person co-op multiplayer mode called Survival. Although, developer Rebellion is adding significant new features to its tried-and-tested blueprint.

The most prominent new feature in Sniper Elite 5 will be familiar to any Dark Souls fans: if you’re playing the new Invasion mode, you can drop into another player’s campaign as an enemy sniper and indulge in some PvP action. Rebellion is using the same system for co-op play, too, so you can now request aid from another player if you find yourself stuck in the campaign – you can still play through an entire campaign with a co-op companion if you want.

Another change that shows the drift of the series in recent years is that you now shift into first-person whenever aiming down a gun’s sights. Before, the only weapon that had that perspective was your trusty sniper rifle, with the rest of your armory sticking to third-person.

There are many more ways to customize your weapons in Sniper Elite 5. Whenever you find workbenches in missions, you can spend resources to change most elements of your guns, such as magazines, sights, barrels, stocks, silencers, and ammo types. New traversal methods allow you to travel around missions in new ways, too. You can flank and surprise enemies in new ways thanks to the zip wires dotted around levels and climbable vines. Plus, Rebellion has somehow worked out how to make Sniper Elite’s trademark Killcam even more forensically lurid.

A return to France

You’re returning to the front as Karl Fairburne, the US Ranger uber-sniper from the previous games. Sniper Elite 5’s action takes place in France in 1944 – spanning events both before and after D-Day, Rebellion told us. The story opens with Fairburne on a mission to weaken the Atlantikwall fortifications along the Brittany coast in preparation for D-Day.

Fairburne hooks up with the French Resistance, but the plot swiftly mushrooms when he encounters Sniper Elite 5’s main antagonist, Obergruppenfuhrer Abelard Moller, and digs up intel about secret project Operation Kraken.

We don’t know a lot at this stage – how many missions comprise the single-player campaign, for example, or how long it might take you to play through them all. But Rebellion has redoubled its efforts to achieve authenticity, employing methods like photogrammetry to reconstruct real-world locations and working with partners like the Imperial War Museum to get things like weaponry, vehicles, and uniforms spot-on.

Creeping in the undergrowth

Our mission opens in a rural clearing in a wood just outside a sun-dappled French village, with a cutscene in which Fairburne, accompanied by another agent from the Special Operations Executive, hooks up with a couple of Resistance fighters. The head Resistance operative reports that SS officer Abelard Moller is responsible for a recent spate of local outrages and has seized Chateau de Berengar as his HQ. Moller and his entourage are elsewhere, but there are rumors that he’s in charge of a secret operation, so Fairburne agrees to infiltrate Moller’s office in the chateau and gather relevant intel.

After scrutinizing the map – also marked with an optional objective involving assassinating a high-ranking Nazi officer – we work towards the chateau through the countryside. The environment is stunningly modeled, with authentic-looking vegetation that proves to be handy cover when hiding from German patrols. We can sneak through the long grass to slip past the enemy unawares. Handily, if Fairburne is crouched and we click the left stick on our controller to get him to run, he will drop back into a crouch afterward. It’s a small detail, but a welcome one.

If you enjoy Sniper Elite 4, you will find Sniper Elite 5reassuringly familiar. It has a proper open-world, play-how-you-want feel, reinforced by noticeably larger levels than previous games, at least if the one we’re playing is representative. Typically, the AI (even on the medium difficulty setting) was rigorous – German vehicles on a  nearby road stop and fire at us if we enter their sightlines, for example, which reinforces the need for a stealthy approach.

Using Fairburne’s binoculars to scout ahead, we encounter a pocket of enemy guards and our first chance to see Sniper Elite 5’s Killcam in action. If you pull off a single-shot kill with a sniper rifle, you’re rewarded with a graphic visualization of your bullet’s damage, showing which bodily organs your shot penetrates and which bones it bounces off. Under fire, we snipe another enemy, then run to loot the bodies – another familiar Sniper Elite mechanic and one crucial for replenishing ammo, grenades, and medical kits.

We sneak into the chateau by shimmying up a vine and climbing through an open window. Inside, our gaming headset earns its keep, as we can pinpoint the sound of incoming footsteps allowing for several stealth takedowns. The door to Moller’s office is locked, but Rebellion tells us there are numerous ways inside: if we had killed one of Moller’s lieutenants, then we would have found a key on the body; or we could pick the lock (though risk discovery); or, as we do, gain access by heading up a floor to the dusty attic, then dropping down through a hole in the floor. Moller’s office yields valuable intel, but not what we sought, and Fairburne realizes there must be a hidden room. You need to work out how to open the secret door by fiddling with different objects in the office, and behind the fake wall, we find a file on Operation Kraken.

Somewhere an alarm is triggered, and we have to escape the chateau as waves of enemies assault the countryside manor. Even when we reach our exfiltration point, we have to make sure we aren’t being followed (read: kill everyone in the vicinity). It’s a satisfying end to the mission.

Everything you do in Sniper Elite 5 – dramatic sniper kills, takedowns, discovering secrets and intel – earns you skill points. We leveled up during our demo mission, allowing us to explore the RPG-style skills tree. It’s split into three components: Combat, Equipment, and Body. We spend our first point on a Combat skill called Back In The Fight, which lets you use a medkit to heal when downed, granting a second lease of life. Other Combat skills on offer include the ability to throw back grenades, various levels of enemy tagging, and quick laying of traps.

Our first playthrough of the Occupied Residence mission took over an hour, we approached it at a leisurely pace, taking as many opportunities to explore as we could. On our second run, we took a different approach, literally, entering the chateau through secret escape tunnels and restricting ourselves to stealth kills as much as possible.

Our new route into the manor leads us to new secrets and collectibles, suggesting there will be lots to reward replaying all of Sniper Elite 5’s missions. We can’t speculate how long it will take to play through the campaign without knowing how many levels are in the final game. Still, hopefully, it will be a meaty experience for those who want to find everything hidden within its missions.

Zooming in on the details

Rebellion has improved Sniper Elite in many subtle ways. Graphically, it’s a cut above its predecessors, too, with a lot of time and care paid to period details, making the fictional storyline believable. Throughout the missions we play, we overhear conversations between enemies, for example, which provide helpful information and a wealth of lore that grounds you in the history of the time.

WW2 Europe has always exerted a fascination for a lot of gamers, and Sniper Elite 5’s depiction of the momentous events of France in 1944 is uncannily plausible. Factor in classic Sniper Elite third and first-person action gameplay, and you have the recipe for a game that looks set to delight the series’ fans. It’s due for a May 26 release on PC, PS4, PS5, Xbox One, and Xbox Series X|S, and we’ll bring you more details as they emerge in the lead-up.