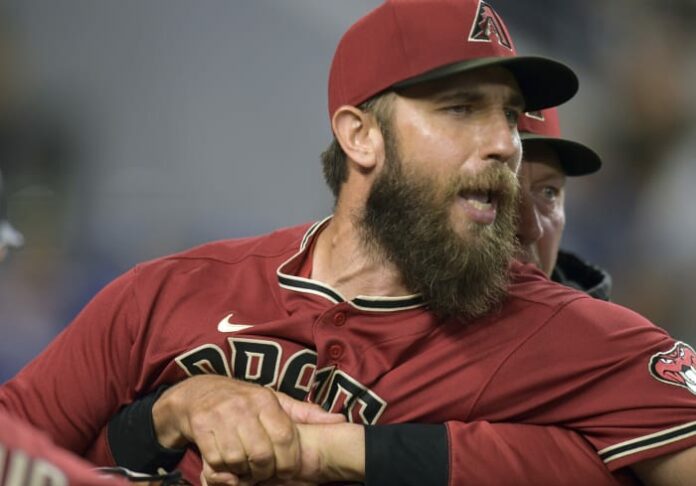 MIAMI – Pavin Smith hit a two-run homer in the ninth inning, and the Arizona Diamondbacks beat the Miami Marlins 8-7 on Wednesday after left-hander Madison Bumgarner was ejected.

Bumgarner gave up a leadoff homer to Jon Berti in the first, and then retired the next three batters. As he was walking to the dugout, the pitcher gestured with his arm before holding his hand out for a foreign-substance check by first base umpire Dan Bellino.

Bumgarner said something to Bellino as the check was ending, and the umpire threw him out. Bumgarner then started yelling at Bellino and had to be restrained by some coaches.

It was Bumgarner’s second career ejection. He also was thrown out on June 11, 2018, for arguing balls and strikes.

The Marlins scored two runs in the seventh and eighth to take a 7-6 lead. But the Diamondbacks rallied in the ninth, completing a three-game series sweep.

Daulton Varsho hit a one-out single against Anthony Bender (0-3) before Smith connected for his third homer of the season.

Ian Kennedy got three outs for his third save.

De La Cruz’s RBI single tied it at 6 in the eighth. The Marlins then went in front when Jazz Chisholm Jr. scored on a wild pitch by Keynan Middleton (1-1).

Arizona stretched its lead in the sixth. Ketel Marte raced home on Sergio Alcántara’s single and an error on De La Cruz in center.

Diamondbacks: RHP Merrill Kelly (2-1, 1.27 ERA) is scheduled to start the opener of a three-game set against Colorado on Friday.

Marlins: LHP Jesús Luzardo (2-1, 3.10 ERA) will start the opener of a four-game series at San Diego on Thursday.