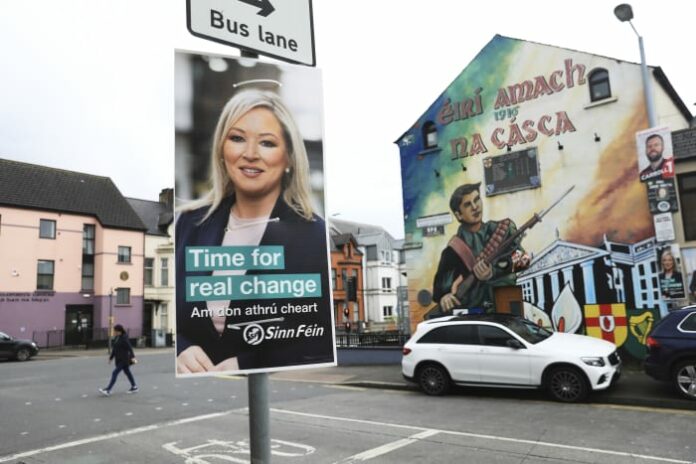 BELFAST – Ever since Northern Ireland was founded as a Protestant-majority state a century ago, its governments have been led by unionist politicians who defined themselves as British.

But if opinion polls are right, an election Thursday will see Sinn Fein, an Irish nationalist party that seeks union with Ireland, become the largest group in the 90-seat Northern Ireland Assembly. That would give Sinn Fein the post of first minister in the Belfast government for the first time.

It would be a milestone for a party long linked to the Irish Republican Army, a paramilitary group that used bombs and bullets to try to take Northern Ireland out of U.K. rule during decades of violence. And it would bring Sinn Fein’s ultimate goal of a united Ireland a step closer.

But it’s not what the party — or voters — want to talk about in a campaign that has been dominated by more immediate worries: long waiting lists for medical care and the soaring cost of food and fuel.

“I now ration my heat to one hour a day,” said Sinead Quinn, who set up the group Derry Against Food Poverty to press politicians to act on the cost-of-living crisis.

“My entire circle of friends is affected by this. I don’t think you can throw a stone in Northern Ireland and miss a community that being affected by it.”

The economic crunch — driven by the war in Ukraine, COVID-19 pandemic disruption and Britain’s exit from the European Union — is also dominating election debate elsewhere in the U.K. Votes Thursday to elect local authorities in England, Scotland and Wales are a test for beleaguered British Prime Minister Boris Johnson, whose popularity has been battered by scandals over lockdown rule-breaking.

In Northern Ireland, Sinn Fein has downplayed talk of a united Ireland in its campaign to focus on bread-and-butter issues.

“The things that the public want us to respond to is trying to put money in their pockets to help them deal with the cost-of-living crisis,” said Michelle O’Neill, the party’s leader in Northern Ireland, during a televised election debate on Tuesday. She said she was not “fixated on a date” for a unity referendum.

Many voters simply hope the election will produce a functioning government, but that appears unlikely in the short term.

Under Northern Ireland’s power-sharing system, created by the 1998 peace agreement that ended decades of Catholic-Protestant conflict, the jobs of first minister and deputy first minister are split between the biggest unionist party and the largest nationalist one.

Both posts must be filled for a government to function. The Democratic Unionist Party, which has been the largest in the Northern Ireland Assembly for two decades, has suggested it might not serve under a Sinn Fein first minister.

The DUP also says it will refuse to join a new government unless there are major changes to post-Brexit border arrangements, known as the Northern Ireland Protocol, that are opposed by many unionists.

“The political institutions must be sustainable.” DUP leader Jeffrey Donaldson said during Tuesday’s debate. “And that means we have got to deal with the big issues that are in front of us, not least the harm that the Northern Ireland Protocol is doing to undermine political stability in Northern Ireland.”

The post-Brexit rules have imposed customs and border checks on some goods entering Northern Ireland from the rest of the U.K. The arrangement was designed to maintain an open border between Northern Ireland and EU member Ireland, a key pillar of the peace process.

But unionists say the new checks have created a barrier between Northern Ireland and the rest of the U.K. that undermines their British identity.

The instability has led to rising tensions and sporadic violence, including a week of rioting in Protestant Loyalist areas a year ago. Last month, police were pelted with petrol bombs after a dissident Irish Republican parade in Derry, also known as Londonderry.

The British government is pressing the EU to agree to major changes — removing most customs checks — and is threatening to unilaterally stop implementing the rules if the bloc refuses.

Negotiations have reached an impasse, with the bloc accusing Johnson of refusing to impose rules he agreed to in a legally binding treaty.

Meanwhile, politics in Northern Ireland are changing. More support is going to parties that identify as neither nationalist nor unionist, with young people increasingly rejecting the traditional labels. Polls suggest the centrist Alliance Party is vying for second place with the DUP, another potentially seismic development.

Full results of the election, which uses a system of proportional representation, are not expected until the weekend at the earliest.

The new legislators will meet next week to try to form an executive. If none can be formed within six months, the administration will collapse, triggering a new election and more uncertainty.

Quinn, the anti-poverty activist, said that would be a “dereliction of duty.”

“Both communities — all communities and none — are struggling here,” she said. “It’s wider than the usual Northern Ireland flavor of politics, that green and orange tribal dance,” she added, in a reference to the colors associated with nationalists and unionists, respectively.

“I’m really hoping that the politicians are listening.”